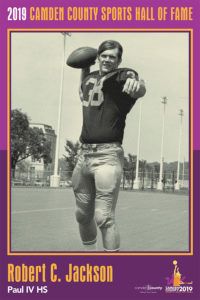 Robert Jackson graduated from Paul VI in 1972. He participated in football, indoor track and baseball with one year of wrestling as a freshman. For the Eagles, he was a standout baseball player that included time at Shortstop and Pitcher. He received All South Jersey honors his Senior Year. His prowess was recognized by scouts that included a visit from the Washington Senators who considered drafting him. Baseball would not be part of his future plans as a cold day on the field led to some problems with his throwing arm. He was eventually moved from Short Stop to First Base. Jackson will learn years later that he had a torn rotator cuff.

Bob was an outstanding member of the of Paul VI Indoor track team. A member of the High Hurdle Relay Team, Bob and his teammates broke a South Jersey High Hurdles Record. Albeit short lived as Metuchen would regain their record later in the same meet. For a sport that is usually built on individual records, Jackson is proud that it was a Relay Team where he found success.

Jackson’s exploits on the gridiron would be his most memorable. Initially getting Varsity playing time as the punter his Freshman year, he would become Wide Receiver and Safety for his Sophomore and Junior seasons. The team was led at Quarterback by Bill Deery and had a very successful 8-1 record during Jackson’s Junior year. With the departure of All South Jersey Deery, the Eagles needed to fill the QB void. In stepped Jackson to lead what will be a memorable Senior year. Jackson fondly recalls the team song being “The Impossible Dream.” Several games highlighted that year including a come from behind win against Lenape. Bishop Eustace presented a strong defensive effort against the Eagles, but an overall team effort is what helped Jackson and his teammates succeed. An especially gratifying win was against JFK High School avenging the only loss from the previous season. Finishing the year 9-0 and Ranked #1 makes this team one of the best to ever play for Paul VI. Jackson has previously entered the Paul VI Hall of Fame and the football team from his Senior year is also entering the Paul VI Hall of Fame this year.

His football accolades included being recognized by Brooks-Irvine, the All-American award as well as All-State New Jersey, All South Jersey, South Jersey Player of the year, and several conference awards. Bob is most proud of the accomplishments that this team made together. Bob was heavily recruited by 19 of the top twenty football teams in the country. After much consideration, he was inspired by his Grandfather’s service in the Navy helping Bob decide on the United States Naval Academy. Though entering Freshman year as a Quarterback, he moved over to Tailback. Bob eventually became the fullback for three years. The most memorable games were those against Notre Dame. Bob ran 135 yards against the Irishman one year. Also, of great pleasure was being alongside his Naval brothers in an undefeated 3 – 0 run against Army. This leader of the field became a leader off the field too. Rising to the rank of Captain, Jackson earned 25 medals and ribbons for personal or command excellence, he believes his highest achievement has been the selection for him to command 3 ships; USS Merrimack, USS Ponce, and USS Wasp.

“There are no individuals in team.  These words allowed me to be successful on the athletic fields, and to be just as successful in leading men and women in the military.” Captain Robert Jackson