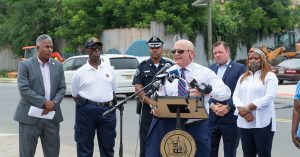 The visit comes after recent legal actions by the City of Camden and the State in which lawsuits were filed against the Chestnut Street property owners, past and present, to compel a cleanup of the illegal dump site.

Both filings request that the court order current Weyhill Realty Holdings, the current owner, to take immediate remedial measures to address the unhealthy environmental and unsafe conditions imposed on local residents, including:

The 40-foot high stockpile includes toxic fill material, construction and demolition debris, and waste tires. Significant amounts of debris have migrated to neighboring properties on 7th Street, Chestnut Street, and Sycamore Street; high volume of pedestrian and foot traffic in the surrounding residential neighborhood have only exacerbated the transfer of contaminated waste.

Despite multiple notices of violations issued to the property owners and a Cease Operations Order issued by the City of Camden in April of this year, the solid waste stockpile remains.

Commissioner Nash talked about the blatant disregard this property owner has for the Bergen Square neighborhood and the residents of the city and county.

“I want to thank the Acting AG and DEP Commissioner for coming down today to get a firsthand look at the most transparent case of environmental racism in the state,” Nash said. “This landholder needs to be held accountable for his actions and needs to remediate this property as soon as possible – the environmental degradation that has occurred to the surrounding blocks is unacceptable and nothing less than a full remediation plan will be accepted by the community.”

County Health Officer Dr. Paschal Nwako, said the county HazMat team has been monitoring the site 24-hours a day to ensure dumping has stopped on the site.

“The collateral damage from this dump site is appalling, it’s quite obvious that the residents and the neighborhood have been negatively impacted by this five-story high pile dirt and debris,” Nwako said. “That said, we have already issued a notice of violation to the property owners and are working with the state and the city to hold the landowner accountable. We continue to monitor the site on a daily basis to ensure this abhorrent behavior doesn’t continue to persist and that we can get one step closer to the overall remediation of this situation.”

Mayor Carstarphen responded to the City and State’s collective efforts to hold Yaffa and Weyhill accountable for years of environmental racism.

“I applaud Acting AG Andrew Bruck, DEP Commissioner Shawn M. LaTourette, and the Governor Murphy administration for their support in achieving a positive outcome for the City of Camden and our residents,” Carstarphen said. “After years of neglect, irresponsible behavior, and blatant environmental injustices, Yaffa and Weyhill must be held accountable for the egregious acts imparted on our residents. I am hopeful that the courts will answer our call for restoration so that our citizens can finally enjoy basic necessities including clean air and clean streets.”