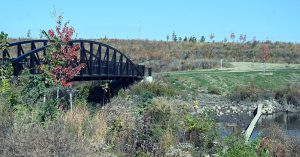 (Camden, NJ) – Gov. Phil Murphy joined federal, state, county and local officials on Tuesday to tour and formally open the Cramer Hill Waterfront Park. The multi-million project has transformed the former Harrison Avenue landfill into a 62-acre waterfront park, making it the largest park in the City of Camden.

Cramer Hill features an array of amenities such as such a fishing plaza, hiking and biking trails, a

“This park represents equity and justice in the city. Residents are no longer exposed to a space where crime thrived, where illegal dumping took place daily and where parents had to keep their kids away from this landfill. Today, this greenspace rivals any park in the state and represents the kind of investment and change that Camden deserves.” said Commissioner Jeff Nash. “Moving forward, I hope the city and the county can develop programming that gets as many kids onto this property as possible to stoke their imagination and curiosity.”

The project, funded by the State of New Jersey, focused on protecting the shoreline, closing the landfill, restoring natural resources and constructing the new park. Part of the park’s makeover included stabilizing more than 3,000 feet of shoreline along the river, expanding the existing freshwater wetlands and preserving wooded areas that will serve as forage habitats for a variety of wildlife.

“I grew up in Cramer Hill and I could never have imagined the transformation of this former landfill into such a beautiful community asset,” said Camden Mayor Victor Carstarphen. “The park is not only a $48 million investment in our neighborhoods, it’s an investment in the quality of life for all of our residents and a symbol of revitalization for the community. I am grateful to Governor Murphy, Congressman Norcross and our partners at every level for making this project a reality. This is another sign of change in Cramer Hill. I believe it will be a catalyst for additional development and will help to compliment the adjacent Kroc Center, the new Mastery School, Action Pak and the $35 million rehabilitation of Ablett Village across the street. The park will be a place of recreation for future generations and all ages.”

“Thanks to the collaborative work by the community and every level of government, the residents are reconnected with the waterfront through this remarkable park,” said Congressman Donald Norcross. “Now families can enjoy the outdoors and spectacular views right in their own neighborhood.”

The completion of Cramer Hill Waterfront Park symbolizes the city and county’s commitment to revitalization and improving the lives of its residents.