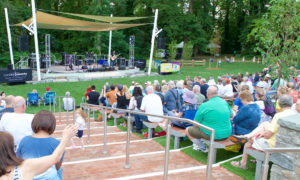 The Dell is one of the most valued entertainment venues in Camden County, mainly thanks to the enthusiastic and participatory community in Haddon Heights and throughout the area. Last year, major renovations modernized and updated the 87-year-old venue built by the Roosevelt-era Works Progress Administration. Camden County crews renovated the stage and sound systems, updated the seating, and expanded accessibility for those with disabilities.

Other various quality improvements were made to the site as well. The venue’s capacity was increased from 3,500 to approximately 4,000 visitors, and the adjacent trails were improved to ease the transport of support equipment.

“We’re so excited about these upgrades because they give the venue a modern flair and improve the visitor’s experience without abandoning its backyard feel,” Nash said. “The Dell maintains its hidden-gem charm, but the newly-realized atmosphere is going to surprise a lot people.”

Freeholder Nash was also joined by the families of Camden County Prosecutor’s Office Investigator, John McLaughlin, and Haddon Heights Police Officer John Norcross. Investigator McLaughlin and Patrolman Norcross were tragically shot and killed in 1995 while trying to serve a search warrant to a residence on Sylvan Drive.

The Dell has been re-dedicated as the Norcross-McLaughlin Memorial Dell in their honor.

“These brave men sacrificed their lives in the service of others, and their legacy will continue to inspire and embolden the people of this community,” Nash said. “I am glad for every opportunity to honor them in any way that we can, and paying tribute to these two men is the least we can do for them and their families.”

The night was capped off with the first concert of the 2019 Camden County Concert Series – a performance by Darlingside with special guest Matt Duke. Five more acts will take the Dell’s stage this summer:

The Camden County Park System’s 21 parks and conservation areas offer over 2,000 acres of natural settings for picnics, family gatherings, sporting events, beautiful waterways for fishing and boating, a wealth of playgrounds and a variety of ball fields that are close to home. For more information regarding the Camden County Park System, visit us online at https://www.camdencounty.com/service/parks/.