NJDOT Lane Closures in Place on Route 130 in Pennsauken 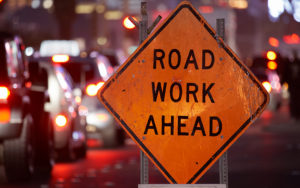 (Lindenwold, NJ) – Freeholder Susan Shin has been informed by the New Jersey Department of Transportation (NJDOT) that left lane closures on Route 130 near Union Avenue in Pennsauken Township will remain in place for several weeks as their intersection improvements project advances.

“As part of the ongoing NJDOT project, lanes are reduced in both directions on Route 130 in Pennsauken,” said Freeholder Susan Shin Angulo, liaison to the Camden County Department of Public Works. “Please plan an alternate route and give yourself extra time to reach your destination if your travel plans include this section of roadway.”

Beginning earlier this week, NJDOT closed one left lane on Route 130 in each direction to begin removing sections of the median and install crash cushions as part of an intersection improvements project. The left lane closures will remain for the next several weeks. If the work is completed earlier, the lanes will be reopened.

Additional lane closures may be required weekdays between 9 a.m. and 3 p.m. for the next several weeks as the work continues. For the duration of the work, large trucks are required to follow the posted detour.

The Route 130 intersection improvements are part of larger $1 million federally-funded program for intersections to address safety concerns by making modifications and accommodations to intersections that need the improvements, including ADA compliant ramps, pedestrian crossings, push buttons traffic signals and signage.

Variable messaging signs (VMS) will be used throughout the project limits to provide advance notification to motorists of all traffic pattern changes associated with the project.

The precise timing of the work is subject to change due to weather or other factors. Motorists are encouraged to check NJDOT’s traffic information website www.511nj.org for real-time travel information and for NJDOT news follow us on Twitter @NJDOT_info and on the NJDOT Facebook page.