Millions in Infrastructure Work Begins in the City 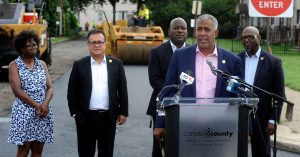 Camden Mayor Victor Carstarphen, Commissioner Al Dyer and Camden City Council members announced a major initiative to improve roadways throughout the City of Camden with residents. In the Liberty Park neighborhood, the first full reconstruction of roads will take place and will encompass the revitalization of 45 streets during the fall construction season. The more than $3 million plan will impact every section of the city and address a host of outstanding issues.

“We have not seen this level of investment, maintenance and revitalization of public infrastructure in the last 60 years,” said Commissioner Dyer, liaison to the county Department of Public Works. “I cannot stress the importance of this work for the city and the county. This community has had to deal with crumbling infrastructure for the last 60 years and now we have a multi-phase plan in place to deliver new streets, curbs and sidewalks for residents. This will also be a benefit to not just motorists, but to our neighbors on foot and for bicyclists.”

Surveys of city residents have shown that repairing city streets is the number one priority and to address this issue, the mayor and commissioner unveiled short-term and long-term plans to improve Camden’s roadways. This is phase two of a multi-phase comprehensive roadway resurfacing plan which calls for the reconstructions of miles of city streets, curbs and sidewalks.