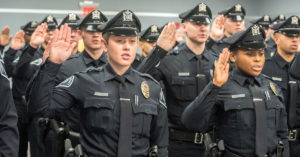 The statement below is by Commissioner Cappelli regarding the eighth anniversary of CCPD’s creation.

“Today marks eight years since the inception of the Camden County Police Department, and eight years since the birth of a new era in Camden City. Since that time, the men and women of the agency have devoted their lives to the idea that policing can be community focused, and that officers should be guardians and resources for the residents they serve.

Last summer, and again in recent weeks, I’ve watched and read national news coverage of the Camden County Police Department as a model for the nation in the wake of police killings across the country. The progress that has led to this point is thanks to each and every member of the department, from leadership to civilian employees. Still, I would be remiss if I did not specifically highlight and thank Scott Thomson, Joe Wysocki, and Gabe Rodriguez, the men who have thus far served as Chief of the department and who together have forged a path rarely taken by modern police departments.

At the turn of the last decade, Camden was widely recognized as one of, if not the, most dangerous cities in America. Crime was surging and it was clear to all who looked that the old model of policing was failing. County and city leaders agreed that dramatic change was the only way to move forward, and the old city police department was stood down for the creation of a new, completely rebuilt organization.

By 2020, crime rates in the city fell to lows not seen in a generation. Major crimes – murder, rape, robbery, assault – dropped by more than 40 percent, and crime overall reached its lowest level in a decade. Most importantly, CCPD achieved this unprecedented turnaround while improving relations with the community. Barbeques in the park, pickup basketball games, officers visible on walking beats in the heart of the city’s neighborhoods were all changing the perception of what police officers meant to those they served.

In 2019, CCPD adopted one of the most progressive use-of-force policies in the nation, one which places the sanctity of human life above all else and prioritizes the preservation of life whenever possible. We train officers to ensure that the use of force is always a last resort, and any use of force is immediately to be reviewed by a supervisor during the officer’s shift. Our officers have been asked to travel the country to teach de-escalation tactics to other departments.

The best part of my job as an elected official is hearing from and working with our residents. There is no better feeling than when a mother tells me that because of the improvements we’ve made in public safety her children can play in the street for the first time, or that her teens can finally walk to school safely. Those stories are only rivaled by those of other residents who say that for the first time in their life, they know the names of the officers in their community, that they trust them to assist them when they’re in need, and that they are willing to work hand in glove with those officers to make their home a better place to live.

Eight years after the creation of the Camden County Police Department, there is of course still work to be done, and we are committed, along with Chief Rodriguez, to maintaining an open dialogue with the community about how we can continue to improve our operations. Camden City is irrefutably a safer, more prosperous place to live thanks to CCPD and its leadership, and I look forward to celebrating even more of their accomplishments in the years to come.”