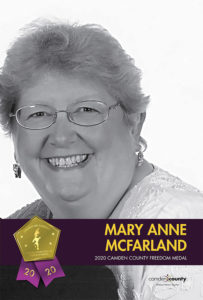 Mary Anne is a long-term resident of Pennsauken whose commitment to service has had her involved in grassroots initiatives and leadership roles for three nationally recognized organizations.

Mary Anne was a member of the Woman’s Club of Merchantville and an integral part of winning many of the awards they received at state conventions. She chaired the Home Tour and established the long-standing Operation Santa. Mary Anne was a long-term troop Leader for Boy Scouts in Merchantville, Pennsauken and Haddon Heights, having a great impact in the region by fostering future leaders. She was instrumental in the lives of countless young leaders, supporting at least 20 young men as they worked for and achieved the rank of Eagle Scout, the highest rank in Boy Scouts, and is still active in the Scouts today. Mary Anne currently serves on the Lions Club of Pennsauken and has been the Secretary and Sight Chairperson for the Pennsauken School District for the last decade.