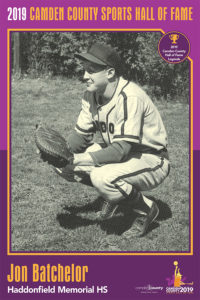 A great 3-sport standout athlete at Haddonfield High School, Jon was recruited to play football at the U.S. Naval Academy. Graduating from the Academy in 1959, he stayed on to coach football, boxing, and baseball. Jon got his Masters in Education from George Washington University, and went on to teach for 35 years at Eastern HS, while coaching football and baseball. In 1994, he was inducted into Haddonfield’s Hall of Fame.