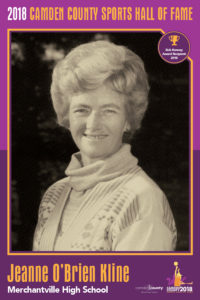 Jeanne O’Brien Kline was inducted into this Hall of Fame in 2006, along with the late Bob Kenney, Hall founder and first president. Their pictures and writeups ran side-by-side in that year’s program book, which probably was fitting.

None have done more for South Jersey girls’ sports than these two. Jeanne is the third recipient of the Bob Kenney Award for her contributions as player, coach, official and administrator over a 74-year period (and still counting).

She had a great career in field hockey, basketball and softball under coach Mary Rice at Merchantville High School. By her sophomore year she started in all three sports and, as a senior, she was voted Most Valuable Player in hockey and basketball by her teammates.

It was the era of a single dribble and divided court in girls’ basketball. Jeanne played the defensive end so well that she was regarded as South Jersey’s best defender. In fact, she was later inducted into the Basketball Hall of Fame without ever scoring a basket!

Kline continued her education at Rowan and Temple and became an outstanding performer in adult competition. She played in the West Jersey Field Hockey League for 32 years through 1980 and was selected to the West Jersey League’s first tournament team from 1948 to 1960. She was picked to represent South Jersey in 11 seasons, including national and international competition. Jeanne also helped form the Field Hockey Club of South Jersey and served as treasurer for 32 years.

She officiated high school field hockey through 1978 and became a umpire for national and even international field hockey. She also served as a national official in basketball and lacrosse.

Kline was a charter member of the Al Carino Basketball Club and is still active today, having served two terms as president and five years as treasurer. She also served 11 years as president of the West Jersey Lacrosse Officials board.

In 1973, she became Dean of Students and head hockey coach at Bishop Eustace and her teams compiled a 234-90-59 record, including two state championships, three South Jersey titles and nine Olympic Conference championships. She enjoyed having her three daughters, Susan, Carol and Jane, as her assistant coaches at Bishop Eustace. She is also proud of two players, Kelly James and Kathy McGahey, who were U.S. Olympians.

After retiring from Bishop Eustace, she served as assistant hockey coach at Moorestown High and became part of an additional three state titles, five South Jersey crowns and six Olympic Conference championships in as many years. Since that, she has also helped with the programs at Cinnaminson and Delran High Schools.

She was also selected to the All-Century Team in basketball, chosen by the Courier-Post.

Jeanne has had a good supporting cast through all these endeavors, starting with her husband of 66 years, Russell, and three daughters, Susan, Carol and Jane. The Klines also have nine grandchildren (Erica, Joe, Jarett, Dennis, Derek, Doug, David, Caitlin and Kevin) and 11 great-grandchildren coming along on a field near you and, for a change, Jeanne and Russell can just sit back and enjoy watching them play.