Infrastructure Work to Start in the City 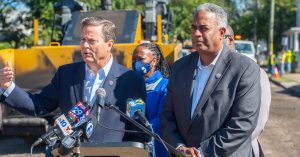 Camden Mayor Victor Carstarphen, Commissioner Jonathan Young, Congressman Donald Norcross and Camden City Council members announced a major initiative to improve roadways throughout the City of Camden. In the Liberty Park neighborhood, the first full reconstruction of roads will take place and will encompass the revitalization of 13 streets prior during the fall construction season.

“We know investment into our neighborhoods and more importantly into our streets make a huge difference in the community,” said Commissioner Young. “In fact, I would argue it is one of the most effective ways you change the environment of a block or a neighborhood is by ensuring that your roads are drive-able, walk-able and bike-able. No one wants to live in a place where the streets and utilities underneath them are crumbling.”

Surveys of city residents have shown that repairing city streets is the number one priority and to address this issue, the mayor and commissioner unveiled a short-term and long-term plan to improve Camden’s roadways. This is phase one of a multi-phase comprehensive roadway resurfacing plan which calls for the reconstructions of miles of city streets.