In Regards to the Passing of Judge Theodore Davis 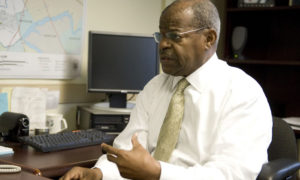 “Camden County lost a great public servant and community leader with the passing of Judge Davis, a tireless advocate for City of Camden and all residents of Camden County. Judge Davis serves as an example to us all for constantly demonstrating the highest standards of professionalism and integrity.

Throughout his distinguished career, he served as an assistant attorney and municipal court judge for the City of Camden, along with serving as an assistant prosecutor for Camden County. Judge Davis was appointed a Superior Court judge in 1981 and named presiding judge of the Chancery Division-General Equity in 1991. He retired from the bench in 2003, but his service to his community endured. He was appointed interim Chief Operating Officer for the City of Camden from 2007 to 2009, leading the way for the tremendous rise the city is experiencing today.

The Freeholder Board wishes to extend its most heartfelt thoughts and condolences to his family. Judge Davis taught us all what it truly meant to serve our fellow citizens and give something back to our community. We will continue to benefit from his work for decades to come.”