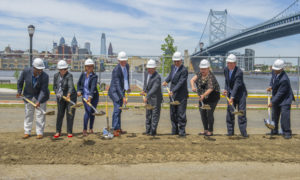 (Camden, NJ) – Camden County Freeholder Jonathan Young joined Ensemble Real Estate Investment and local officials today for a groundbreaking ceremony at the site of a new Hilton Garden Inn in Camden City. Planned to open by October 2020, the new hotel will introduce 180 new rooms for visitors to the city.

Officials joined the hotel developer to discuss the number of jobs coming to the area and the economic impact of the project in relation to Camden’s overall revitalization.

“This is indicative of Camden’s overall resurgence. Hotels are built where people want to work and stay, and for the first time in decades the demand for accommodations in Camden is substantial,” Young said. “This is the first time in 50 years that a new hotel is planning to open its doors in the city. The influx of economic activity from guests, in addition to the new jobs that will be created here, is going to boost economic growth and expand opportunity citywide.”

Freeholder Director Louis Cappelli Jr., previously touted the potential for future projects to follow in the footsteps of this spectacular achievement.

“I believe this is just the first of several hotels to be built here and another foundational asset that underscores the fact that the city is flourishing and will continue to grow,” Cappelli said. “We’re already seeing unprecedented demand for accommodation space in the city, and Camden’s rise is only in the nascent stages of what we believe it has the potential to achieve. This is a tremendous milestone that signifies everything the City and its residents have accomplished.”

As Camden’s premier hotel, the Hilton Garden Inn will offer 180 rooms to meet increasing demand from Camden’s growing business community, whose roster now includes prominent companies like Subaru, American Water, the 76ers, and most recently, ResinTech. The hotel, scheduled to be completed in Q4 2020, will also be conveniently located to students and families visiting Rowan University, Rutgers University—Camden, and Cooper University Health Care System. Presently those visiting Camden’s businesses and educational institutions must seek hotel accommodations outside of the City of Camden.

The hotel will be developed and owned by Ensemble Real Estate Investments and Louise Cicalese, and it will be operated by Concord Hospitality Enterprises Company, who maintains a large presence in the Mid-Atlantic and southeastern Pennsylvania market. Designed by Cope Linder Architects with InTech Construction serving as the general contractor, the hotel will eventually create up to 75 local jobs.

“We are so proud to play a role in bringing Camden its first hotel in more than 50 years,” said Kam Babaoff, Chairman, Ensemble Real Estate Investments. “We firmly believe that offering quality lodging and warm hospitality helps further strengthen the soul of a community. We are designing and programming the Hilton Garden Inn on the Camden Waterfront to become fully integrated in the fabric of Camden’s community, and we look forward to offering skilled jobs to a city who is as excited about us coming to town as we are to partner with them.”

The City of Camden is experiencing an unprecedented period of growth with some $2.5 billion in new development either planned or under construction. The hotel will cater to corporate, leisure and group demand generated by existing businesses and attractions, as well as the additional demand generated by the three million-plus square feet of commercial office space planned and under construction in Camden County.

“We welcome Hilton Garden Inn and the development team of Ensemble Real Estate Investments and Louise Cicalese to Camden with open arms,” said Camden Mayor Frank Moran. “With all the new businesses expanding and relocating to Camden, our city needs its own space to house visitors – and the Hilton Garden Inn will offer them exceptional accommodations and top-notch amenities.”

The hotel’s guest rooms include 18 premier corner suites to accommodate longer term stays associated with local educational and medical institutions, as well as significant demand from the projected expansion of area businesses. The hotel will offer over 5,000 square feet of meeting space, a restaurant and bar, and free parking. Additionally, 80% of the guest rooms and the hotel restaurant will have spectacular views of the dramatic Philadelphia skyline, the Delaware River, and the Ben Franklin Bridge.