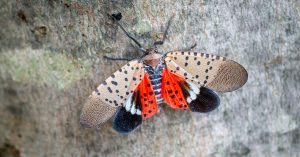 (Cherry Hill, NJ) – Spotted Lanternflies (SLF) are an extremely invasive, crop-eating insect which recently arrived in New Jersey. Lanternfly eggs which were laid in the fall will begin to hatch in May, and because SLF are known to destroy fruit trees, grapevines, and other agricultural crops, officials are once again calling for the public’s help identifying and destroying SLF eggs in order to limit the population.

According to the United States Department of Agriculture (USDA), SLF typically lay their eggs on smooth surfaces, appearing similar to a patch of mud. Residents are advised to check outdoor items for egg masses, including those which may have been brought indoors for the winter.

“By now, most of us have seen this pest in our community, and while their presence is often a nuisance to outdoor gatherings, the true cost of this species’ growth is their capacity to devastate crops, trees, and plants,” said County Commissioner Jeff Nash, liaison to the Camden County Parks Department. “With eggs expected to begin hatching soon, we do not have much time left to minimize the threat posed by this invasive species. Please be sure to check your surroundings for egg masses and, when spotted, follow the necessary steps to safely destroy and dispose of them. By destroying SLF egg masses, you are helping to control the population and protect South Jersey’s agricultural economy.”

To properly destroy SLF egg masses, the USDA recommends scraping the mass into a plastic zippered bag filled with hand sanitizer, then zipping the bag shut and disposing of it properly.

Spotted lanternflies are not known to bite, sting, or attack people, pets or livestock, according to the Pennsylvania Department of Agricultures. It is not known whether they are poisonous when ingested by humans or animals. The pest is primarily a threat to agriculture including many fruit and crops.

More information about SLF is available from the United States Department of Agriculture by visiting here.