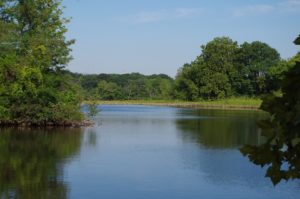 (Pennsauken, NJ) – This morning, two decades after the site was originally cleared of shuttered and seedy businesses, the Camden County Municipal Utilities Authority (CCMUA) will open the 25-acre, half-mile Gateway Park to the public. The park is situated between Cooper River and Admiral Wilson Boulevard, and runs from The Pub in Pennsauken to approximately where the Boulevard meets 19th Street.

“The Freeholder Board wants to thank the public for its patience, persistence, and for collaborating with us to make this dream become a reality,” said Freeholder Jeff Nash, liaison to the Camden County Parks Department. “The businesses that once sat at the site of Gateway Park were razed nearly 20 years ago, but the impact of what they left behind lasted long after they were gone. Today, I’m thrilled to say that the site has been remediated and can finally be opened to the public in its entirety.”

The site was first cleared in 2000 by the Delaware River Port Authority (DRPA) but has been closed to the public ever since due to environmental concerns. Ownership of all 16 parcels of Gateway Park were transferred from DRPA to the CCMUA over the last several years at no cost to the County.

The land was first promised to CCMUA shortly after it was ordered to be cleared by the Christie Whitman administration to improve the appearance of the area for guests attending the 2000 Republican National Convention in Philadelphia. The gas stations, hotels, and other businesses that lined the Boulevard were cleared, but the property was never transferred to CCMUA.

“This is only the beginning of what Camden County has planned for Gateway Park,” Nash said. “With the Park opened to the public, we’ve fulfilled a promise first made to our residents years ago. The next step is to understand how we can further develop this park and how we can connect it with the rest of our incredible services and amenities around Cooper River.”

CCMUA couldn’t acquire the land until DRPA addressed lingering environmental concerns and remediated the site. Leftover, and previously unknown, underground petroleum product-holding tanks were discovered, and it took years to properly address the contamination. Now a lush green space, the park has been completely remediated and is ready for future development.

Once opened, CCMUA will partner with the New Jersey Conservation Foundation (NJCF) to manage the park and land. The NJCF has been a tireless partner to get the park open and accessible to the public and their aggressive efforts over the last four years have been pivotal to the park remediation and opening.

“New Jersey Conservation Foundation is extremely excited about the opening of Gateway Park. We look forward to working with Camden and Pennsauken residents to help make this new park a great place to visit, enjoy and connect with nature,” said Michele S. Byers, executive director of New Jersey Conservation Foundation. “We’re pleased to manage the park in partnership with the Camden County Municipal Utilities Authority and look forward to encouraging the community to get out and enjoy the park and Cooper River.”

Mayor Francisco “Frank” Moran talked about the new asset for the city. The mayor has been an advocate for green spaces and renovating land into third places for residents to enjoy, while delivering river access back to the community.

“Camden is so fortunate to have strong partners in the state, county and foundations who appreciate the importance of investing in parks right here in our City,” Moran said. “I am a strong advocate for parks and have witnessed their ability to transform communities. Parks are catalyst for development, community assets, and provide residents with beautiful recreational opportunities. Camden has realized $106 million dollars of investment in our park systems and as Mayor, I am committed to providing quality open spaces.”

In addition, this is an environmental conservation project and that is part of a larger plan of the CCMUA to green or create 100 permeable acres in Camden City for stormwater capture. This initiative will continue to reduce flooding in the city and take stress off an antiquated stormwater system.

Pennsauken Mayor Jack Killion spoke about the connection to Cooper River East and synergies that will boost the experiences for passive and active recreation.

“The opening of Gateway Park is great news for our community. Cooper River and the surrounding areas draw residents from all over for recreation, sporting events, concerts, and more,” Killion said. “This great outdoor space will undoubtedly create more wonderful opportunities for people to come together for years to come.”

A group of concerned residents, Friends of Cooper River West formed in 2012 and have been advocating for the opening of the park. Martha Chavis is a Camden resident and one of the original members of the group who talked about the new amenity she can’t wait to utilize.

“For me this is part of the transformation of the city, it’s another place for our families and children to play and enjoy nature. It’s a stretch of the river that has been closed for decades from use and now our community can finally have access to it.” Chavis said. “I can’t wait to get my bike out and ride through the park and enjoy the spectacular greenway along Cooper River.”

The Camden County Park System encompasses over 4,000 acres of passive and active recreational options at 21 sites throughout the county. In the parks you will find boat launches, bike trails, walking paths and playgrounds in every corner of the county. In addition, parks like Cooper River have been recognized statewide as a Great Place in New Jersey by the American Planning Association.