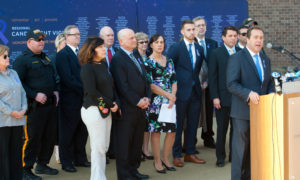 (Camden, NJ) – In order to take Camden County’s ongoing fight against opioid addiction to the next level, the Freehold Board will file a ground-breaking lawsuit against the drug companies, owners, manufacturers, distributors and retailers that ignited the epidemic. The lawsuit is being uniquely filed under civil racketeering statutes that deem these individuals owned and operated a criminal enterprise that marketed and shipped millions of highly addictive narcotics throughout the nation including, Camden County.

“The record profits achieved by Purdue Pharma, the Sackler family and those that worked in concert with them, were earned at the expense of the millions of individuals who became predictably addicted to the tsunami of opioids unleashed upon the marketplace,” Cappelli said. “The meteoric rise in opioid prescriptions, and the attendant rise in addiction to and abuse of these drugs, is not due to a medical breakthrough, but rather the defendants’ quest for greater profits at the expense of American lives.”

The revolutionary lawsuit names, among others, the Sackler Family, owners of Purdue Pharma, and peddlers of OxyContin. The Sackler Family executed an epic scheme to deceive doctors (and the public at large) into believing that opioids can be prescribed for long-periods of time with little to no risk of addiction; a blatantly false premise. The Sackler Family’s fraudulent and deceptive marketing scheme resulted in billions of dollars for Purdue and its top executives.

“These individuals were knowingly poisoning our families and children and doing it all under the guise of pain management, when we really know it was all based on greed,” Cappelli said. “This was a transparent flooding of the marketplace going back to 1995 when the FDA approved Oxi’s and has ended with their latest announcement that Purdue will no longer market this deadly addictive narcotic. Our families in Camden County deserve more, and today is the first step in making these defendants pay for their criminal behavior.”

From the mid-90s to the present, the manufacturing defendants aggressively marketed and falsely promoted opioids as presenting little to no risk of addiction, even when used long term for chronic pain. They infiltrated medical academia faculty and literature as well as regulatory agencies to convince doctors that treating chronic pain with long-term opioids was evidence-based medicine when, in fact, it was not.

“In New Jersey, deaths from heroin and fentanyl overdoses more than tripled in the last five years. That’s tragic and unacceptable,” said Congressman Norcross, Vice-Chair of the Congressional Bipartisan Heroin Task Force. “Camden County, led by Freeholder Director Cappelli, has been fighting to curb the opioid epidemic on all fronts and knows we must do all we can to help those struggling with the disease of addiction. There is true human cost that’s at stake.”

Increasingly, those who have an opioid dependency, but cannot obtain a prescription (either because they cannot afford it, or cannot find a doctor to fill it), turn from prescription pills to heroin – which is more potent and cheaper. Camden County’s lawsuit explains that 75 percent of patients in heroin treatment today, according to the U.S. Center for Disease Control, started their opioid use with prescription medications, not heroin.

“We are in the middle of a major health crisis, losing a generation to addiction, brought on by Big Pharma and their deceptive and unlawful marketing of opioids – these companies need to be held responsible for the harm their deception has caused,” said Patty DiRenzo. whose son Sal lost his battle with addiction.

Camden County has incurred significant costs and a loss of resources attempting to curb the epidemic, impacting virtually every branch of government from emergency services, to the courts, to care facilities and clinics, to prisons, and to the police department. In many cases, municipal law enforcement agencies have, by default, become the first responders to deal with the crisis. This is not only counter-productive to law enforcement’s intended mission, but not an effective way to stem of the epidemic of addiction.

“Today we take a bold step to correcting the grave injustice that Purdue Pharma and others have perpetrated on thousands of individuals that have fallen to the epidemic of addiction,” said David Mayer, Mayor of Gloucester Township.

In addition to monetary and injunctive relief, Camden County seeks funding for programs to reduce the demand for and availability of heroin and prescription drugs, create awareness programs to help educate residents about resources available to prevent and treat addiction and support the creation of additional resources to treat and prevent addiction to heroin and prescription drugs.