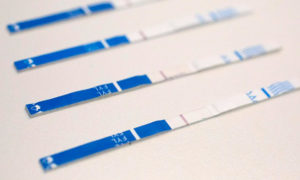 (Gloucester Township, NJ) – The Centers for Disease Control (CDC) has linked the significant increase in overdose deaths since 2013 to synthetic opioids, particularly Fentanyl, in what it calls the “Third Wave” of the opioid epidemic. In New Jersey, drug-related deaths increased by 75 percent between 2015 and 2019, during which period 66 percent of suspected heroin submissions contained Fentanyl or a Fentanyl class compound.

Fentanyl is a synthetic opioid pain reliever used to treat severe pain, typically associated with advanced stages of cancer. Fentanyl is extremely potent, anywhere from 50 to 100 times as potent as morphine, and deadly when misused. A fatal does of Fentanyl is equivalent to a piece of baby aspirin cut into 324 equal pieces.

This month, the Freeholder Board approved a potentially life-saving pilot program designed to implement and study the use of Fentanyl testing strips (FTS) by individuals suffering from substance use disorder.

“It has become increasingly common for Fentanyl to make its way into heroin, but also cocaine and methamphetamine supplies with many users, and often even dealers, unaware of its presence,” said Freeholder Director Louis Cappelli Jr. “Drug use is inherently laden with health risks, but Fentanyl poses a unique threat because it is so often ingested unknowingly. This program aims to arm users with the tools to test for it, and to give them the chance to opt for a safer alternative.”

Fentanyl testing strips are an emerging harm reduction intervention that may help prevent unintentional Fentanyl exposure and accidental overdose from opioids and other illicit drugs. The easy-to-use kits allow individuals to test substances for the presence of Fentanyl prior to use.

The pilot approved in February calls for a three- to six-month program with participants from Camden City. Participants will be self-reported drug users in the past 30 days who are willing to complete a short qualitative survey and receive a brief overdose education with FTS training. The participants will then receive an FTS-PAL Kit (Fentanyl Testing Strip-Protect a Life Kit) which includes 10 FTS strips, Narcan with instructions, and a help list for treatment and recovery options.

Each participant will return two to four weeks after training to complete a follow-up and answer questions regarding their experience with FTS, whether they used any of the items in the kit, and if they shared the information they received with others.

“Drug overdose is preventable, that’s the message we’re trying to send to the folks who need to hear it most,” Cappelli said. “This is an opportunity to study another measure that we believe could be critical in minimizing the number of lives lost to this nationwide epidemic each year. If you use one of these strips and it comes back positive for Fentanyl, you’ve just been given a second chance at life. We’re proud to offer that to anyone we can.”

Distribution sites for the kits have yet to be determined. The number of kits to be distributed is expected to fall between 500 and 1,000 in total.