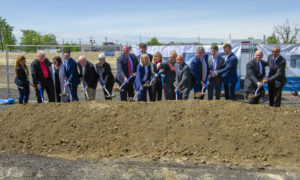 City and County officials joined ResinTech business leaders in breaking ground on the site which will be home to the company’s new headquarters. ResinTech officials also discussed their plans to employ 265 workers upon opening the facility, and the overall economic impact of the project in relation to Camden’s overall revitalization.

“This is another sign of the unprecedented economic growth happening in Camden City. At a time when a lot of New Jersey is competing with their neighbors to hold onto the businesses they already have, Camden is seeing an influx of opportunity and employers,” Nash said. “This move will bring hundreds of high-quality jobs to the City of Camden, and continue to help lift the city to heights not seen in a generation.”

ResinTech’s move reflects the company’s desire to begin “on-shoring” the manufacturing of products that are currently being supplied abroad in China due to a lack of domestic production – and the new buildings will be the first fully integrated polymer and sulfonation manufacturing facility in North America in more than 30 years. The new campus will feature two buildings totaling approximately 27 acres.

ResinTech manufactures products used for water purification which are sold in all 50 states and in over 100 countries. The company is targeting June 2020 for the buildings’ completion and subsequent opening.