Freeholder Kane’s Statement of Comments Attributed to Disparaging Fallen and Captured Members of the U.S. Military. 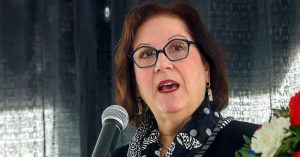 The statement below is by Freeholder and Gold Star mother, Melinda Kane, in regard to comments attributed to President Donald J. Trump in The Atlantic disparaging fallen and captured members of the U.S. Military.

“Over this Labor Day weekend I will get a chance to reflect upon my family, the sacrifices we have made in service to this nation and I will, as I so often do, look at the empty chair at the kitchen table that should be filled by my son Jeremy. It has been more than 10 long years, since Marine Lance Cpl. Jeremy Kane was killed in Afghanistan and not a minute goes by that I don’t think about him and our loss. He dedicated his life to the ideals and principles of our great nation and committed himself to making the world a better place.

Nevertheless, this weekend will not be a holiday of reflection, it will contain, what I can only describe as, a punch in the face, by the current President of the United States who has deeply offended me, my family and every other Gold Star mother and father and Blue Star family in the country. On Thursday, The Atlantic printed a report laying out the President’s true feelings about American service members who have been killed in action as “losers” and “suckers.” Reading the variety of offenses is stunning for the sheer narcissism, ignorance and true evil that his words embrace. These transgressions strike at the core of military service and disgust all of us who are proud family members of the men and women in uniform.

I am nauseated to think that the commander in chief of our military would even think to disparage individuals, like my son, who paid the ultimate sacrifice in service to every American. For the parents raising children whose fathers and mothers have given everything to this country, how do they explain Mr. Trump’s words? These brave Americans served with honor, integrity and heroism doing the things that civilians could not and would not do. That said, here we are today, in a place we never thought we would be – ensuring the world knows that those that serve our country are heroes.

Looking back to 2015, we should have seen this coming from a man who called war hero, the late Senator John McCain of Arizona, a “loser” for being captured and spending five and half years as a prisoner of the North Vietnamese during the Vietnam War. We also should have seen it when he attacked the Gold Star parents of U.S. Army Capt. Humayun Khan, who was killed in Iraq in 2004 by a suicide bomber. That should have been a harbinger for all of us that Mr. Trump was and is unfit to sit in the Oval Office and command the respect of the highest elected post in the nation.

The public should also remember that the current President ran from service when called upon to serve in the Vietnam War with a deferment. This underscores the toxicity of his remarks and the complete and utter indifference to the importance of the heroes that leave their families and friends to serve and protect this nation.

There is one thing I need President Trump to know, my son served our country with honor and was in no way a sucker for joining the U.S. Military. In fact, my son’s dedication to his ideals and beliefs is what makes this country great and his service to our nation should be celebrated not denigrated.”