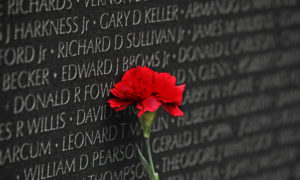 (Pennsauken, NJ) – This week, the Camden County Freeholder Board and Office of Veterans affairs will host a four-day commemorative event in recognition of the 50th Anniversary of the Vietnam War. The event will feature a different program each day beginning Thursday, Sept. 5, and ending Sunday, Sept. 8, at Cooper River Park.

“Every veteran deserves a welcome home and proper thanks for their bravery and service, this week our Vietnam veterans will finally receive that honor that they’ve always deserved,” said Freeholder Melinda Kane, a gold star mother and liaison to the Office of Veterans Affairs. “We’re asking for Vietnam veterans and their families to join us in celebration of their heroism and to pay tribute to those who served but never returned home.”

The commemoration is a four-day program featuring a variety of ways to thank, honor, and support Camden County’s Vietnam veterans.

Thursday, Sept. 5 – The Office of Veterans Affairs will host a special Vietnam Veteran Pinning and Medal Ceremony at 6:30 p.m. The ceremony will honor and celebrate veterans of the Vietnam War who are current members of our community.

Friday, Sept. 6 – Veterans, their families, and other members of the community will come together for a candlelight remembrance vigil at the American Veterans Traveling Tribute Wall (AVTT) on Veterans Island at Cooper River Park to honor those Vietnam veterans who never returned home.

Family members, friends, comrades and schoolmates of Camden County residents who made the ultimate sacrifice in Vietnam, are asked to please RSVP. Roses, Candles & Flags will be provided to be placed at the Wall. RSVP here.

Saturday, Sept. 7 – The County will host a veterans resource fair, featuring family fun, educational activities, and a concert featuring the Tri-County Symphonic Band and Gary Puckett and the Union Gap.

Sunday, Sept. 8 – The Board of Freeholders will partner with the Travis Manion Foundation and others to host the 2019 9/11 Heroes Run. The run supports veterans, first responders, and the military. Participants can register prior to the event by visiting https://www.travismanion.org/community-engagement/911-heroes-run/2019-pennsauken-nj/.

A closing ceremony marking the conclusion of the commemoration will coincide with the run.

In addition to the daily events, the AVTT will be visiting Veterans Island at Cooper River Park. The replica of the Vietnam Memorial in Washington D.C. is 80 percent of the size of the original and contains the names of more than 58,000 American soldiers who were killed or went missing during the Vietnam War. The Wall arrives on Wednesday afternoon and will remain on the island until the conclusion of the commemoration on Sunday.

“This is the first event of its kind for Vietnam Veterans who received historically unjust treatment upon returning home from a war that they did not ask for,” Kane said. “Over the course of these four days, we will celebrate and honor them for the sacrifices they made for their country, pay tribute to those who lost their lives, and provide continuing resources and education opportunities for veterans in our community. We’re ensuring that all who serve receive the recognition and thanks that they deserve.”

The program is hosted by the Board of Freeholders in partnership with the Vietnam War 50th Anniversary Commemoration, the Philadelphia VA Medical Clinic, and The Travis Manion Foundation, it commemorates the 50th anniversary of the war which began in November 1955 and ended in April 1975. In 2012, President Barack Obama issued a proclamation to recognize the 50th anniversary of the war over a 13-year period, during which the federal government would work with local governments to honor and celebrate the veterans in their communities.