The Camden County Board of Freeholders in conjunction with the Camden County Veterans Advisory Committee cordially invite you to attend this special day, set aside by a grateful nation, to honor it’s men and women, past and present, who have faithfully served our nation.

Veterans Day Ceremony will be on Sunday, November 10th at 1 PM at Veterans Island in Cooper River Park on N. Park Drive in Pennsauken. 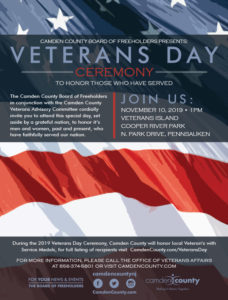