The internationally acclaimed United States Army Field Band of Washington, DC will continue its long tradition of presenting free public performances when it appears in Collingswood on March 14th at 7:30 PM. The Concert Band and Soldiers’ Chorus are the oldest and largest of  The U.S. Army Field Band’s performing components. These two ensembles combine to present joint concerts on national tours and have performed in all 50 states and 30 foreign countries for audiences totaling hundreds of millions. In 2017 the Army Field Band performed a free concert in Collingswood’s Knight Park.

“It was an honor to host the Army Field Band in 2017 and we are honored again that they reached out to us to schedule a return performance,” said Collingswood Mayor James Maley. “Their performances are moving. It’s an incredible show and the March performance will be at one of our town gems, the Scottish Rite.”

The United States Army Field Band concert takes place in Collingswood’s historic Scottish Rite Auditorium (315 White Horse Pike) on March 14th at 7:30 PM and is free to the public. Tickets will be available February 1st though Ticketleap and the Scottish Rite box office. Guests that have handicapped seating needs should call the box office at (856) 858-1000.

The 65-member Concert Band and 29-member Soldiers’ Chorus perform regularly in some of the most famous concert halls in the world, and just as often in the humblest auditoriums in the smallest communities. The joining of these two ensembles allows them to offer unparalleled versatility of programming, ranging from orchestral masterworks and operatic arias to Sousa marches, jazz classics, and Broadway musicals. The band and chorus also perform independently, and have recently shared the stage with such ensembles as the Boston Pops, the Cincinnati Pops, the Detroit Symphony Orchestra, and the Natioanal Symphony Orchestra.

In addition to their national tours, formal concerts, chamber recitals, and educational outreach, members of the Concert Band and Soldiers’ Chorus frequently represent the Army at formal and ceremonial functions including the Presidential Inaugural Parade, presidential funerals, the Army All-American Bowl, and diplomatic efforts overseas. More than six decades of the military’s most traveled musicians have earned them the title “The Musical Ambassadors of the Army.” For additional information about the Army Field Band’s performance in Collingswood, please contact Cass Duffy at (856) 854-0720 x 135. 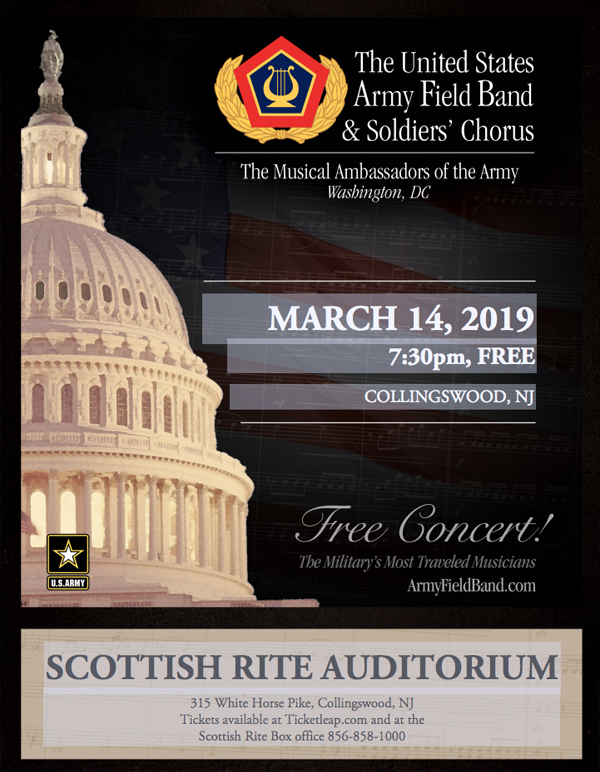