6:00 PM | Movie premiere, including remarks by officials and expedition team 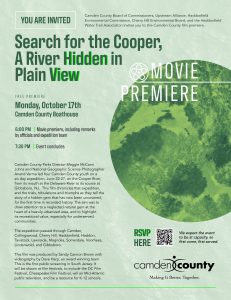 Camden County Parks Director Maggie McCann Johns and National Geographic Science Photographer Anand Varma led four Camden County youth on a six-day expedition, June 22-27, on the Cooper River, from its mouth at the Delaware River to its source at Gibbsboro, NJ. This film chronicles that expedition, and the trials, tribulations, and triumphs as they tell the story of a hidden gem that has now been uncovered, for the first time in recorded history. The aim was to draw attention to a neglected natural gem at the heart of a heavily urbanized area, and to highlight its recreational value, especially for underserved communities.

This flm was produced by Sandy Cannon Brown with videography by Dave Harp, an award-winning team. This is the first public screening in South Jersey. It will be shown at film festivals, including the DC Film Festival and Chesapeake Film Festival, will air Mid-Atlantic public television, and be a resource for K-12 schools.