The Camden County Board of Commissioners and the Addiction Awareness Task Force invite family and friends to remember the loved ones we lost and spread the message of hope to those still fighting the disease of addiction. Help raise awareness of the crisis we’re facing within our community.

Let’s erase the stigma and advocate for change.

REMEMBERING THOSE WE LOST

GUESTS WELCOME TO WALK AROUND MEMORIAL 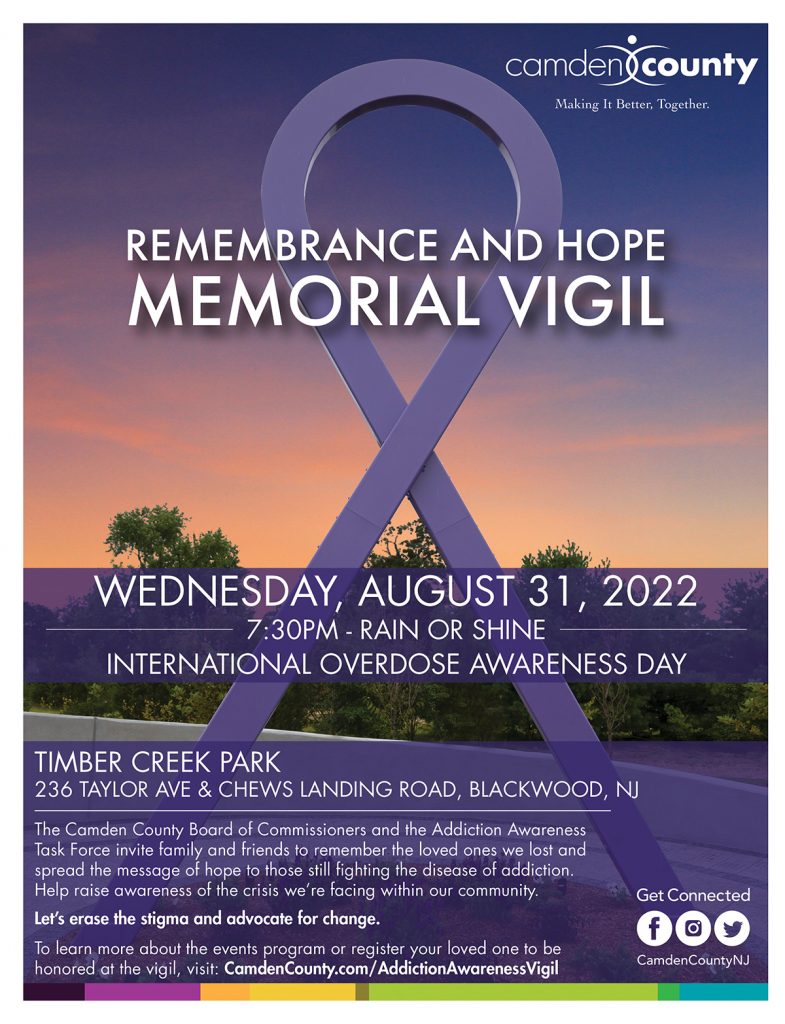 Joseph Owens is a person living in recovery from substance use, from Blackwood, NJ. At 18, as a college freshman on scholarship for academics and football at a school in Washington DC, Joe began using drugs and alcohol for which he thought ignorantly was just part of the college experience. His life would change drastically for the next 12 years, he would live in active drug addiction nearly resulting in his life ending and hurting his family and friends along the way. Joseph would struggle to finish college, be found guilty of multiple DUIs, suffer from several overdoses, give away friends, family, and relationships in the process, and completely lose his identity throughout his active addiction. He sought help from various inpatient and outpatient facilities, traveled afar to faith-based programs in Michigan and in Georgia for treatment, try doctors and maintenance options for help, and in the process exhaust any option or person willing to hope.

At 29 years old, while the world adjusted to a global pandemic, Joseph was sleeping on others couches no longer welcome in his own home and would overdose behind the wheel for a second time before finding himself back in detox again. But this time would be different. In May of 2020 Joseph went to a sober house program called Life’s Journey, who offered him yet another chance. He built one good day, on top of one good day. Slowly he saw through the help of his house mates, a sponsor, a consistent and patient routine, that his life improved. At 7-months sober, Joseph would graduate from Rowan University and gift his diploma to his Mother and Father who always loved and prayed for him despite his actions. Joseph now works in treatment as an Outreach Coordinator, is a Master of Social Work Student at Temple and gives back to those in early recovery. He has a girlfriend who loves him, is the “Dogdad” to a puppy named ‘Bryce’ and is active in his family and friends’ lives. He truly has a life he never thought he’d deserve and lives each day in memory for those who are no longer with us. He tries every day to be an example of hope.

Tanya Niederman has resided in South Jersey with her family for over twenty years. She holds many personal and professional roles, but is most proud of mothering her three beautiful children. She lost her oldest child, and only son – JJ Niederman, on February 12, 2021. Since then, she has been actively involved in Camden County’s Fentanyl Awareness Program by sharing her family’s story of loss with others in the hope of saving lives. She’s led the operations side of one of the top real estate teams in the area for the last five years and her commitment to her team and clients is unmatched. Tanya is a powerful force, a true source of optimism to those who know her, and she exhibits bravery and strength in the face of a parent’s greatest trauma – the sudden loss of her son. She is continually inspired by and loves spending time with her daughters, Grace and Carter. She loves watching them train and perform with their Elite All-Star Cheerleading team and also enjoys days at the beach and helping others. You can frequently find Tanya spreading random acts of kindness in JJ’s memory.

Remembering Those We Lost

International Overdose Awareness day is August 31, 2022. It is a day where individuals, families, colleagues, and neighbor’s worldwide come together to remember those lost to addiction by overdose.

On August 31st, all of us in Camden County’s Addiction Awareness Task Force will take the time to remember these losses.  The Ben Franklin Bridge, Florio Center and City Hall in Camden will be colored in purple.   The Remembrance And Hope Memorial Vigil will take place on Wednesday, August 31, 2022 at 7:30 PM at Timber Creek Park, 236 Taylor Avenue & Chews Landing Road, Blackwood, NJ

Please consider wearing something purple on August 31st.   Take pictures of your unit and share photos with us at #OverdoseAwarenessDayCC. Let us respect the power of the disease!  You can also forward them to patty.direnzo@camdencounty.com