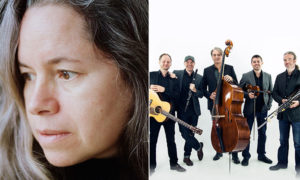 Presented by the Camden County Board of Freeholders in association with BRE and the Borough of Collingswood, the Scottish Rite Auditorium welcomes Natalie Merchant & Lunasa on Saturday, March 23rd, 2019. Doors open at 7 PM, showtime at 8 PM.

Formed in 1997 and celebrating its 20th anniversary, Lunasa has long been one of contemporary Irish music’s leading voices. Named after an ancient Celtic harvest festival in honor of the Irish god Lugh, the group that Folk Roots magazine called an “Irish music dream team” was formed from members os some of Ireland’s greatest bands and over the years has proven its mettle time and again, having sold over a quarter of a million records, and collaborated with notable artists such as Natalie Merchant, Mary-Chapin Carpenter, and Tim O’Brien. They have performed more than 2,000 shows across 36 countries including high-profile concert venues such as Carnegie Hall, The Hollywood Bowl, National Concert Hall (Dublin), and Paris Bercy, and many of the leading festivals such as Glastonbury, Womadelaide, and Edmonton.