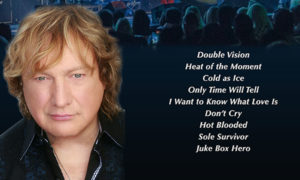 Presented by the Camden County Board of Freeholders in association with BRE and the Borough of Collingswood, the Scottish Rite Auditorium welcomes Lou Gramm – The Original Voice of Foreigner with ASIA featuring John Payne on Friday, January 26, 2019. Doors open at 7 PM, showtime at 8 PM.

Lou Gramm is a founding member of Foreigner and one of the greatest singers in rock music. His unique vocals and hit song have placed Foreigner among Billboard’s Top Artists of all time. Their 16 Billboard Top 40 Hit Songs defined an era. Some of their hits include: “I Want To Know What Love Is,” “Double Vision,” “Cold as Ice,” “Head Games,” “Juke Box Hero,” “Blue Morning,” “Hot Blooded,” “Feels Like The First Time,” and “Urgent.”

John Payne because the frontman of the supergroup ASIA in 1992 at the invitation of keyboardist Geoff Downes, replacing vocalist/bassist John Wetton. ASIA extensively toured the world for the next 14 years performing new classics and old favorites. With John Payne fronting the band, ASIA released 8 stunning studio albums and several live recordings. In 2006, Geoff Downes left the band to reform the 1982 lineup for their 25th anniversary.