Presented by the Camden County Board of Freeholders in association with BRE and the Borough of Collingswood, the 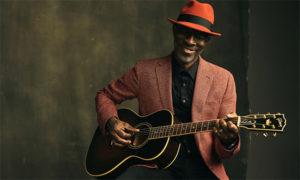 This year Keb’ Mo’ is celebrating his 25th Anniversary year of performing under the moniker, with the release of two albums, Oklahoma (June 14) and Moonlight, Mistletoe, And You (Oct. 11), Keb’s first ever holiday album released throughout his lengthy and successful career. This fall, Keb’ Mo’ will embark on a holiday tour, Jingle Bell Jamboree, which will feature the four-time Grammy-award winning contemporary Blues and Americana artist performing songs off of Moonlight, Mistletoe, And You.

Over the years, Keb’ Mo’ has cultivated a reputation as a modern master of American roots music through the understated excellence of his live and studio performances. From performing in front of President Barack Obama at the White House to the LA Forum with Garth Brooks, Keb’ Mo’ is keeping the Blues alive with the ability to demand the attention of broad audiences spanning the globe. B.B. King, Buddy Guy, the Dixie Chicks, Joe Cocker, Robert Palmer and Tom Jones have all recorded his songs while his list of collaborators include Bonnie Raitt, Jackson Brown, Cassandra Wilson, Amy Grant, Solomon Burke, and many others.