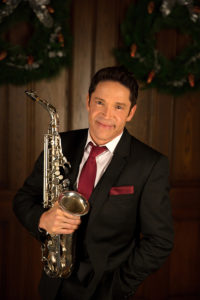 Presented by the Camden County Board of Freeholders, in association with BRE Presents and the Borough of Collingswood.

Two decades ago, GRAMMY® nominee Dave Koz – a nice Jewish boy – launched his first-ever Christmas tour. Now, fans and families across the country await his arrival with the kind of anticipation formerly reserved for St. Nick himself, earning the saxophonist extraordinaire the nickname “Santa Koz.”

This year’s 20th anniversary tour promises to be extra-special, reuniting Koz with two members of the original lineup – David Benoit and Peter White – and Rick Braun, a guest on many of Dave’s holiday jaunts, dating back to the early years. Newcomer Selina Albright will also join in the festivities. Together, the five remarkable artists will perform fresh renditions of Christmas classics as well as a Chanukah medley and hits from their respective catalogs.

“By all rights, smooth jazz should own the holiday season, and the saxophonist Dave Koz is better positioned than anyone to make it so,” observed The New York Times while The El Paso Times said, “Some might say it wouldn’t be Christmas without Santa, but in El Paso, it’s not Christmas until Dave Koz comes to town.”
Koz has logged nine No. 1 albums on Billboard’s Current Contemporary Jazz Album chart, including 2015’s Collaborations: 25th Anniversary Collection (Concord Records), and received nine GRAMMY nominations. His five holiday albums include 2014’s The 25th of December. Pianist David Benoit is a three-time GRAMMY nominee who has released 35 albums, scored several films and conducted such symphonies as the Los Angeles Philharmonic and the London Symphony Orchestra. Trumpet maestro Rick Braun has racked up more than 20 No. 1 singles and is also known for his work with RnR and the powerhouse trio BWB. One of the most versatile and prolific acoustic guitarists on the contemporary jazz landscape, Peter White has had numerous No. 1 songs on Billboard’s Smooth Jazz Songs chart and is featured on tour mate Rick Braun’s latest hit, “We Don’t Talk Anymore.” Selina Albright’s 2013 EP, Brighter, topped the UK Soul Chart for four weeks and her new full-length album, Conversations, is out now. She has collaborated with the renowned DJ duo Manufactured Superstars and has appeared on Gerald Albright’s GRAMMY-nominated projects, dating back to 1997.