Battle on the Battleship

Battle on the Battleship 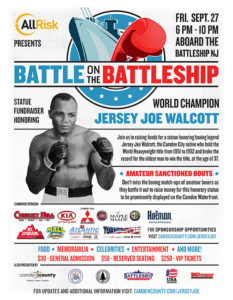 Join us in raising funds for a statue honoring boxing legend Jersey Joe Walcott, the Camden City native who held the World Heavyweight title from 1951 to 1952 and broke the record for the oldest man to win the title, at the age of 37.

Don’t miss the boxing match-ups of amateur boxers as they battle it out to raise money for this honorary statue to be prominently displayed on the Camden Waterfront. 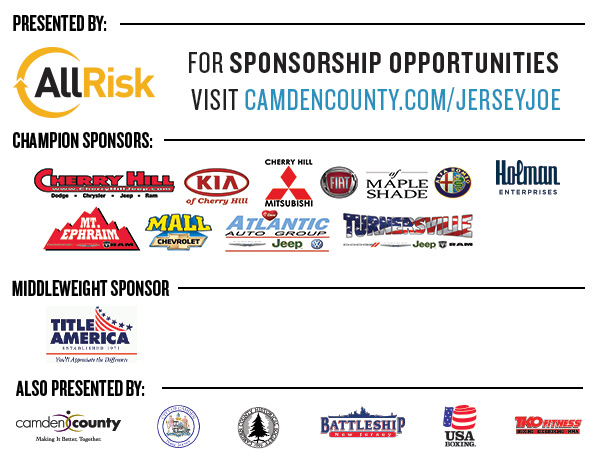 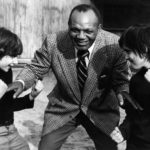 Sheriff Joe Moseys in. The sheriff of Camden, New Jersey, has hit town. Times was when he hit heavyweight boxers, for the law officer is former world champion Jersey Joe Walcott. Joe, now 59, will be at Wembley on Tuesday when his middleweight protege Dav 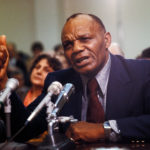 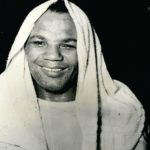 Jun. 06, 1948 – Preparing to become world champion? Jersey Joe Walcott gets ready..Jersey Joe Walcott works up a good sweat while doing his training chores in camp at Orenloch, N.J. he is to meet Joe Louis on the night of June 23rd., at the Yankee Stadium

After retiring from boxing, Walcott did some acting, playing small parts in a few movies and television shows. He also refereed several boxing matches, but after the controversial ending to the second fight between Muhammad Ali and Sonny Liston, Walcott was not asked to referee again. From 1971 to 1974, Walcott held the elected position of Sheriff of Camden County, New Jersey, the first African-American to do so. From 1975 to 1984, he was the chairman of the New Jersey State Athletic Commission.

About the Artist: Carl LeVotch 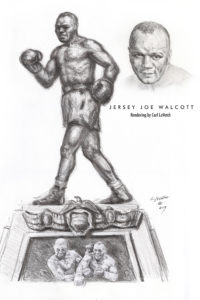 As a guy born and reared in East Camden (son of an artist and athlete who played football at Woodrow Wilson in the 30’s), and a boxing aficionado/gym rat who has sparred with contenders and champions, I’m excited to have this opportunity to honor and commemorate Camden’s favorite son, Heavyweight Champion Jersey Joe Walcott (Arnold Cream).

Having to date been privileged to create five awards for the Boxing Writers Association of America and numerous other artworks on the sport, including a 7ft sculpture of Middleweight Champion Joey Giardello (Passyunk Avenue, Philadelphia, Pa), I view this present commission as a culmination of my lifelong passion for art, Camden and the sport of boxing.

I am proposing to create an 8ft bronze figure sculpture, two bronze high relief sculptures, and a bronze replica of The Champion’s ring belt. These works of art will be affixed to a pedestal/base, and the entire monument will be placed permanently on the promenade at Wiggins Park, Camden, New Jersey.

My goal is to create a magnificent work of art that will become a magnet and an inspiration worthy of Jersey Joe Walcott and the City of Camden.

In addition, I look forward to extending an invitation to the students of the community to experience the development of this meaningful work of art; through scheduled visits to my studio during the development stages of the sculptures. The studio will also be open to periodic fundraising receptions.

More about the artist: https://tss.ib.tv/boxing/featured-boxing-articles-boxing-news-videos-rankings-and-results/28488-carl-levotch-renowned-boxing-statuary-big-plans-next-project