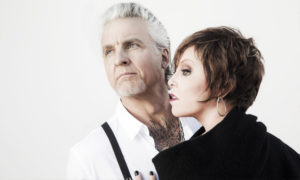 Presented by the Camden County Board of Freeholders in association with BRE and the Borough of Collingswood, the Scottish Rite Auditorium welcomes A Very Intimate Acoustic Evening with Pat Benatar & Neil Giraldo! Doors open at 7 PM, showtime at 8 PM.

Pat Benatar and Neil Giraldo have formed one of the most successful partnerships in music history.  During their nearly four-decade career, they have won an unprecedented four consecutive Grammy awards, as well as three American Music awards.  Their undeniable chemistry, Benatar’s mezzo-soprano vocal range and Giraldo’s trail blazing work as a producer, guitarist and songwriter created some of rock’s most memorable hits. These include, “Promises in the Dark”, “Hell is For Children”, We Live For Love”, “Love Is A Battlefield”, “Hit me with Your Best Shot” and “We Belong.”  Their rock and roll love affair has endured for 38 years and they continue to tour every year, wowing audiences everywhere.