The Camden County Board of Freeholders and the Travis Manion Foundation are proud to present the 9/11 Heroes Run! The 5k and 1 mile Fun Run will take place at Cooper River Park on Sunday, September 10th at 9:11 AM.

The 9/11 Heroes Run seeks to honor the sacrifices of those heroes from September 11th, 2001, and the wars since, to include veterans, active duty, first responders, and families of the fallen. This run welcomes people of all levels and ages, volunteers, friends, and family.

Started in 2007, by the family of fallen 1st Lt. Travis Manion as a grassroots run in his hometown Doylestown, PA with 300 runners, the 9/11 Heroes Run has over 50 race locations, presence in 38 states and united more than 30,000 people annually. Race proceeds are used to directly support the Travis Manion Foundation, which empowers veterans and families of the fallen to develop character in future generations. They believe the best way to honor the fallen is by challenging the living. 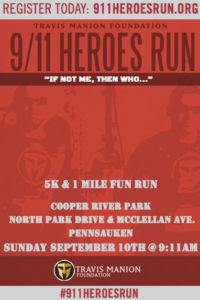