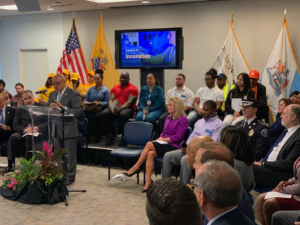 (Camden, NJ) – Two former governors of the state of New Jersey joined Camden’s elected officials at the James J. Florio Center for Public Service in Camden to address the progress that’s been made in the City.

In 2011, the municipality was the state’s and the nation’s most dangerous and poorest city. Since that time, Camden has risen from the ashes and benefitted from unprecedented changes in law enforcement, education and historic economic development. Today, the city has its lowest crime rate in 50 years, the high school dropout rate has been cut in half and the city has experienced more than $2.5 billion in public-private investment.

“What’s happening in Camden right now cannot be understated. This is a city-wide effort to turnaround one of the most troubled cities in the nation, and over the last five years the results have been miraculous,” Florio said. “Camden residents have not seen critical public and social health indicators like education, public safety, and public spaces, at levels this beneficial in a generation.”

Former Governor Jon Corzine echoed these sentiments and more, highlighting Camden’s improved crime and graduation rates as evidence that the impacts of Camden’s rise are reaching far beyond the waterfront.

“In a city that used to top list after list naming the most dangerous cities in America, we’re now seeing generational lows in public safety. More kids are graduating from high school and fewer are dropping out giving themselves an opportunity to become successful throughout their lives,” Corzine said. “Everything is interrelated. When I look at Camden, I see an example of how a struggling community can be revitalized. The City of Camden may be on the rise, but the fact that peoples lives themselves are improving is most encouraging.”

Michael Douglass, a Camden native, talked about the jobs and opportunities ResinTech, Inc. is bringing to residents and his company’s commitment to hire local on the 27-acre campus in East Camden.

“I grew up here in Camden and I’m still a resident of Camden, and I know firsthand what we need to make the city better,” Douglass said. “I was in out of jail starting at 15 and for the next 15 years cycled in and out of the system, ResinTech took a chance on me based on my experience I know they are committed to hiring from here in the city creating careers for Camden residents.”

Another skilled laborer and Camden native, Michael Johnson, who lives in the city’s Fairview neighborhood talked about getting training through the UOSS and becoming a certified union laborer who built the American Water campus.

“I can see myself being able to do more, to be a better provider for my family,” Johnson said. “The training I received helped me build some of the great new buildings in the city and South Jersey. I’m proud to be from Camden and my hope is the economic boom continues, so we can rebuild the city.”

In 2017, Camden City led the nation in employment growth. According to the Bureau of Labor Statistics the city had the highest percent increase of jobs over the course of a year. During the previous 50-year period the city had only seen disinvestment and deindustrialization.

Every single, solitary indicator in the city has improved over the last six years from the unemployment rate to the crime rate. The city has benefitted from an unparalleled level of partnership between the public, private, and not-for-profit sectors.

“Camden’s economic resurgence is real, and our city is experiencing the transformational change we have long awaited” said Camden Mayor Francisco Moran. “The future looks bright as Camden is trending in the right direction.  Crime is down, graduation rates are up, and businesses are investing in our city now more than ever. Companies remain committed to local hiring as Camden is experiencing its lowest unemployment rate in 28 years. This is real progress, and these are real opportunities for Camden residents.  As a lifelong resident, it makes me proud to say Camden has become a model for urban revitalization.”

Camden County Freeholder Director Louis Cappelli, Jr. talked about the strides the city has made on a variety of fronts over the last six years.

“I’m proud to stand with the real leaders of New Jersey and declare that Camden is flourishing,” Cappelli said. “The tangible progress being made in this city is nothing short of amazing and we are not going to allow any roadblocks to slow our renaissance down.” 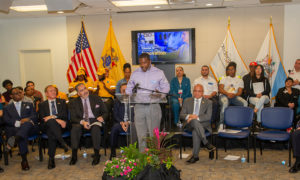 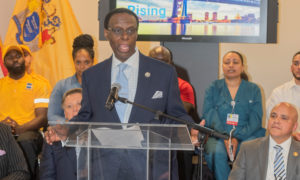 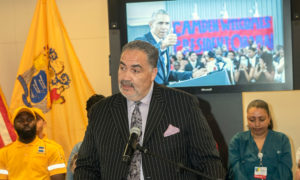