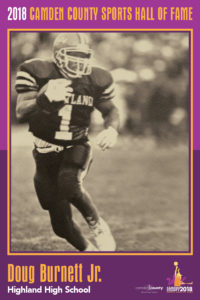 Doug Burnett, Jr. was a two-sport star for Highland High School 1986—1990. He was a standout in both track and football.

In track, Doug ran for Coach Bill Collins and earned four varsity letters and was the key sprinter on a team that lost one meet in his four years. He was a member of the school record setting 4 x 100-meter relay team which still holds the school record. He was also a member of the record setting 4 x 200-meter relay. In his senior year, Doug was one of the track captains leading his team to a third straight undefeated season.

However, it was in football that Doug truly excelled. Some of Doug’s memories on the high school gridiron go back to his first varsity game in 1987 as he recalls fumbling the ball twice. Despite the challenging start, he was a running back on the most successful teams in Highland history. Doug has special memories of taking the team to their first playoff berth after a 25-year drought. His final Varsity game was marked by a career day of 236 yards and four touchdowns against rival Triton. Recognizing his greatness on the field he was named first team All-Conference running back in 1987, 1988, and 1989. He also was named to the All-Group 3 Team during the same span. Doug was named to the All South Jersey 1st team as a running back by both the Philadelphia Inquirer and the Courier Post in 1989. Doug is proud that the same year he was selected as the Philadelphia Inquirer Offensive Player of the Year. The Brooks Irvine Touchdown Club named him running back of the week three times in 1989. He was also named as a Blue-Chip Player by Super Prep Magazine. Doug’s career totals at Highland were both school records. He rushed for over 2,700 yards and 42 touchdowns. Doug remembers Coach Joe DeVito recognizing his talent and getting college recruiters to check him out.

Doug also spent one year on Coach Ralph Ross’ outstanding wrestling team. It was during this time Coach Ross showed Doug that athletics could be his future. During a trip to a wrestling tournament in Florida, Coach Ross took Doug to watch the Orange Bowl which ignited the spark in Doug to want to play football at the next level.

Doug was the first Highland High School football player to receive a Division I scholarship. He attended the University of Maryland. There he was a four-year letter winner as a running back for the Terrapins. A memorable experience for Doug include his first collegiate touchdown against Duke University.

In 1995, Doug tried out for the Eagles, Raiders and Chiefs. Though not successful, Doug appreciated the opportunity football brought him. In the early 2000’s, Doug continued his athleticism by competing in various National Physique Committee (NPC) body building contests. He won multiple competitions including the Mr. Maryland Body Building Championship.