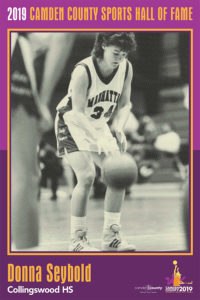 Donna Seybold, a 1986 graduate of Collingswood High, starred in basketball, tennis and softball and earned a total of ten letters during her scholastic career. While she excelled in tennis and softball, she will always be remembered for the Group 2 state championship basketball game in 1986. The Colls team captained by Seybold won the only state hoops title in the school’s history. Collingswood was down 12 points to Harrison when Jeanne Mooney simply took over. She scored 18 points in the last quarter and her basket with 20 seconds left sent the game into overtime.

Seybold saved the day in the first overtime. Her perfect pass to Mooney resulted in a second overtime, which was all Collingswood. The Panthers were victors, 76-66, as Seybold matched her game average of 20 points. Mooney had by far her highest-scoring game with 37.

Donna also praised the team’s coach, John Bach. “Mr. Bach really knew the game,” she said. “His father was an NBA coach. Jeanne and I faced a lot of triangle-and-two and box-and-one defenses and he always had a counter-attack for it. He knew what the other team was going to do before they did it. And he scouted our opponents, which not many did in the girls’ game of that day.”

Seybold earned All-Group honors for three years and was an All-South Jersey choice in 1985 and ’86. She was also selected to the Philadelphia Inquirer’s All-Area team and the NJ State Senior All-Star team in 1986. She played in the Garden State Games in 1985 and ’86.

Seybold earned a basketball scholarship to Manhattan College and was a three-year starter and captained the team in her junior and senior years. She scored 1,214 points and was a member of the 1987 and 1990 MAAC championship teams. Donna was also a member of the MAAC Tournament teams in those years. She was the MAAC Tournament MVP in 1990 for her tourney totals of 62 points, 15 rebounds and 12 assists.

She was the Al Carino Basketball Club’s Collegiate Player of the Year and Metropolitan Association’s Player of the Year in 1990. After playing a year of professional ball in Ireland, she accepted the job of women’s basketball coach at Loyola of Maryland – a rival of Manhattan in the MAAC and coached her team to MAAC Tournament championships (and NCAA Tournament berths) in 1994 and 1995.

Donna then coached at Indiana State for six years (1995-2001) before returning to the Philadelphia to begin an executive sales representative position with Eli Lilly & Co. in 2002. She has been inducted into four Halls of Fame: Manhattan College, Collingswood High, Metro Atlantic Conference and the Al Carino Basketball Club of South Jersey. She is now living back in Collingswood with her wife, fellow Hall of Fame inductee, Gail Shelly.