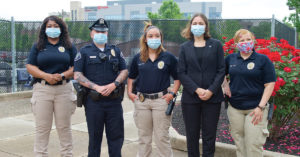 The special order from Chief Joseph Wysocki replaces rules that had been unchanged for many years dating back to the former city police department.

Some of the changes include:

The new personal grooming and appearance standards were developed through discussions over the past several months with uniformed officers and detectives in the department and are designed to be more reflective of modern norms and styles while also helping with recruiting efforts. We want more young men and women thinking about a career as a police officer, and to not turn away from the profession because of overly stringent and dated grooming and appearance rules.

“The goal in updating these standards was to make sure that we maintain a professional look for our officers that is fitting for a police agency while allowing officers to be current and comfortable in the styles that fit them individually,” Chief Wysocki said. “And it was important for us to involve officers in the process of formulating these new standards so that the rules we have put in place are the best fit for our department.”