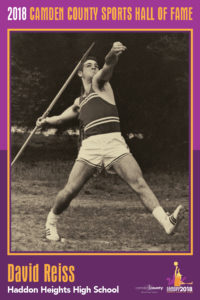 It is not likely that a young David Reiss understood the Christian belief that the moment a person commits themselves to follow God His Providence begins to direct your path in life. But at the very tender age of five, David made this spiritual covenant with his Maker and so later shifted what was a stinging disappointment of rejection in one sport, to a dominating prominence in another that has earned him a deserved spot in the Camden County Sports Hall of Fame.

Like most boys growing up in the 1960’s, David dreamed of being a pro baseball player, but the Haddon Heights born and raised native failed to make the Garnets freshman diamond squad. The pain of having the door to his baseball aspirations slammed in his face was intense but short-lived as the window of opportunity opened for Reiss as a javelin thrower on the Haddon Heights track and field team.

The combination of David’s studious approach to his newfound athletic activity, and Garnets track coach Norm Ford’s advanced coaching techniques, produced noticeable steady results for both the individual and the team.  In David’s junior and senior seasons he threw the javelin far enough to outdistance his New Jersey competition and earned back-to-back state championship titles. In his final scholastic season, David’s personal best throw of 235’ 8” garnered him All America honors and was the third best in the nation – two spots behind Louisiana schoolboy legend, and NFL Hall of Fame quarterback, Terry Bradshaw’s throw of 244’.

Reiss’ javelin prowess brought him a full athletic scholarship to the University of Maryland where his faith and talents grew and explored new boundaries. For the Terrapins, Dave was named an All American with a third place finish in the NCAA championships with a throw of 258’.

After his stellar scholastic and collegiate careers, Dave continued to compete at a high level in javelin events and remained as one of the best throwers in the country. The bigger the stage, the better he performed. Reiss won the Penn Relays open division five times and in the AAU Nationals he placed seventh once; sixth twice; fifth twice; and fourth four times, and during that span of excellence he delivered a career-best throw of 265’ 10”.

For athletes it is the body that falls behind the mind and competitive spirit that forces almost every warrior to the sidelines. But after a nine-year absence, David placed second in the World Masters Athletics (40-45 age group), and later at the age of 67 he finished third in the National master’s event.

But for all of his athletic accomplishments, David always viewed his success in sports as a means to a higher calling – to create a bigger platform to proclaim his faith and bring people to God’s Word. His spiritual walk quietly and confidently professes to understand the importance of not sacrificing one’s soul in order to gain the riches of this world.

David’s personal mission statement is the scripture verse, Philippians 4:13, “I can do all things through Christ who strengthens me” and he has done so with his spiritual partner and spouse, Lynne.

Now there is not much that likely needs changing in the life of a five-year old boy, but Dave Reiss’ commitment to be a follower of Christ decades earlier put him on a path for personal success, and the abundant Blessings of a large, loving family.