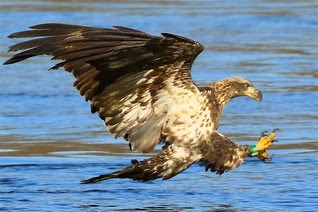 More than 40 years after facing near-extinction, New Jersey’s bald eagle population is soaring and reaching new milestones, including confirmation for the first time of nesting pairs found in each of the state’s 21 counties, Department of Environmental Protection Commissioner Catherine R. McCabe announced today.

New Jersey’s bald eagles achieved three significant population milestones this year in terms of new nests, location and total nests monitored. These milestones cap off decades of conservation work by the DEP’s Division of Fish and Wildlife and the Conserve Wildlife Foundation of NJ to sustain and grow the population of these majestic birds in New Jersey and nationwide.

“New Jersey’s abundant and growing bald eagle population is a great success story that shows our wildlife conservation work and partnerships are effective,” Commissioner McCabe said. “Thanks to the hard work of our wildlife conservationists, a commitment to using the best science and our collaboration with our partners, the growing eagle population that has expanded statewide is proof that we have a healthy environment for wildlife. It is fitting that the bird honored as the symbol of our nation continues expanding its presence in the state that became the crossroads of America’s quest for freedom and independence.”

A record 36 new eagle nests were found this year, including 22 in the south, seven in north and seven in central New Jersey. Bald eagles now nest in every New Jersey county, with Essex being the last county to have resident eagles. Approximately 50 percent of eagle nests occur in Cumberland, Salem and Cape May counties, close to Delaware Bay and its tributary rivers.

In total, biologists with the Division of Fish and Wildlife’s Endangered and Nongame Species Program, along with nearly 100 volunteers and the Conserve Wildlife Foundation of NJ, monitored a record 220 nesting pairs of eagles that produced 307 young. An additional 28 pairs were tracked at nests but did not lay eggs.

“The eagle’s comeback in New Jersey from a single nesting pair in 1980 to more than 200 pairs today is an amazing success story and a tribute to habitat and wildlife conservation work by the Division of Fish and Wildlife’s biologists. In particular, the early restoration work was made possible by public donations to the Wildlife Tax Check-Off on the state income tax form,” said Division of Fish and Wildlife Director Dave Golden. “The bald eagle, peregrine falcon, and osprey are wonderful examples of wildlife recovery, made possible by funds from the Tax Check-off and more recently the Conserve Wildlife license plate program. Federal funding through the Wildlife and Sport Fish Restoration Program promotes sounds conservation of these birds as well as their critical habitats.”

New Jersey had just one surviving bald eagle nest into the 1970s and 1980s as a result of widespread and chronic use of DDT, a synthetic insecticide that had lasting impacts on the food chain, causing eagles to lay thin-shelled eggs that could not withstand incubation. Recovery of the eagle population began in the 1980s and continues today as a result of the federal ban on DDT in 1972 and subsequent environmental improvements, along with intensive work to restore bald eagles in New Jersey and surrounding states.

Another contributing factor to the success of the recovery of the bald eagle population is the Bald Eagle Nest Monitor program, managed by the Conserve Wildlife Foundation of NJ in partnership with the Endangered and Nongame Species Program. This program deploys approximately 100 volunteers to observe nest sites statewide and provides valuable information to DEP biologists.

Volunteers on the eagle project conduct the majority of the nest-observation work that allows the Endangered and Nongame Species Program to track the population and nest distribution. This year, volunteers determined that 210 known-outcome nests produced an average of 1.46 young per nest, which exceeds the productivity rate necessary to maintain a stable population of 1.0 young per nest.

“The comeback of the bald eagle in New Jersey ranks among the most inspiring recoveries of endangered wildlife species anywhere,” said David Wheeler, Executive Director of the Conserve Wildlife Foundation of NJ. “The bald eagle’s return illustrates what is possible for many other rare species when you bring together proactive wildlife management, strong public investment, and the unparalleled dedication of biologists and volunteers.”COVID-19 restrictions this year meant that field work was primarily done by minimal teams. Normally, biologists may visit up to 15 nests to band nestlings and do a health check. In 2020, just 10 eagles were handled, eight of those as a result of necessary intervention after nests blew down or young eagles became grounded. In 2019, one eagle was fitted with a satellite tag that records daily movements. That tag provided data on the bird’s movements to upper Chesapeake Bay last winter, and in central New Jersey this fall. Data for all New Jersey-tracked eagles is available on the Conserve Wildlife Foundation of NJ website under EagleTrax.

The Bald Eagle Research and Management Project is supported by the Conserve Wildlife Foundation of NJ, U.S. Fish & Wildlife Service’s Wildlife & Sport Fish Restoration Program, and by all those who Check-Off for Wildlife on their New Jersey State Income Tax Returns and purchase the Conserve Wildlife license plate for their cars.

To view a video of a mother bald eagle arriving to her nest of eaglets and then leaving, visit www.youtube.com/watch?v=Q_vy8BadyQI&feature=youtu.be