“Concert Behind the Walls” for Inmates Brings Message of Recovery 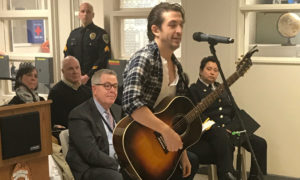 The Camden County Correctional Facility will hosted a “Concert Behind the Walls” featuring up-and-coming artist Matt Butler and his unique blend of folk, rock and storytelling on March 15th.

Butler brings honesty and openness to his songwriting including confronting his lifelong struggle with alcoholism and substance abuse.  After getting sober, Butler recorded his debut solo album Reckless Son, a poignant confession of his battle with addiction and his inspiring path to recovery.

“We were pleased to invite Matt Butler into the Camden County Correctional Facility to provide inmates an opportunity to hear his message of recovery while enjoying his original music,” said Freeholder Director Louis Cappelli, Jr. “I first met this young man at a Camden County Addition Awareness Task Force vigil and was impressed by his talent and courage.”

Butler has performed for incarcerated populations in jails and prisons across the county on his “Behind the Walls Tour.” He was honored as a 2017 Leader in Mental Health Awareness by the National Alliance on Mental Illness.