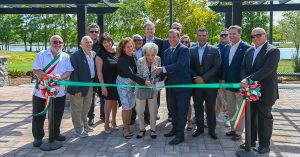 The Camden County Commissioners joined community members and officials from local and state chapters of the Order Sons & Daughters of Italy in America (OSIA) for the unveiling of the Louis F. Cappelli Sr. Bocce Court and Piazza, a new public space in Cooper River Park. This new square provides another space in Cooper River Park to enjoy the river and the surrounding amenities. The board also wanted the opening of the new features to coincide with the start of October to commemorate Italian-American Heritage and Culture month.

“Since we introduced bocce ball into the park it has become an extremely popular past time and the courts are constantly in use at all times of the day,” said Commissioner Jeff Nash, liaison to the Camden County Parks Department. “We wanted to take a hard look at the area and identify a way to expand the space in the most popular park in the county.”

The Louis F. Cappelli Sr. Bocce Ball Court and Piazza is now made up of a paver area with pergolas and seating, a bronze casted lion statue, tree plantings and landscape improvements. The bocce court also received a new pergola and seating area as well enhancements to the playing area. The pergolas incorporate mica schist stonework that ties into both the historic and newer stonework throughout the park. The paver area contains dedication pavers that will be available on an annual basis via donation.

The Order Sons & Daughters of Italy in America were consulted on the redesign of the Italian American memorial to ensure the area reflects their order’s principles of liberty, equality and fraternity. The lion at the center of the piazza is the emblem of the order whose mission includes service and advocacy for all.

“The expansion of this area in the park is just another fitting legacy to Louis Cappelli Sr,” Nash continued. “We believe this space encompasses many of his favorite past times and I know it would warm his heart to see the thousands of people utilizing it today.”

The piazza space will be a permitted site in the park system where all park users can enjoy family gatherings, celebrations and events.