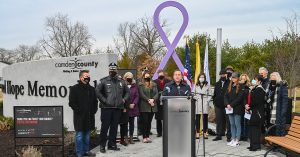 (Blackwood, NJ) – Standing in front of the Remembrance and Hope Memorial, the Commissioners, the Camden County Addiction Awareness Task Force, advocates and law enforcement unveiled a plan to build an awareness and educational campaign about the variety of narcotics that the deadly synthetic opioid, fentanyl, has been showing up in this year. The opioid crisis continues to plague our nation and county as fatal overdoses have skyrocketed since the onset of the pandemic reaching more than 100,000 last year.

“At this time, fentanyl has become so ubiquitous its being found in recreational narcotics that have never been associated with opioids,” said Commissioner Director Louis Cappelli, Jr. “This campaign is for individuals that may not have opioid use disorder but are using substances recreationally and have no idea where they are coming from. The smallest amounts of fentanyl can be catastrophic and fatal, and we want residents to know that a variety of narcotics sold on the street will be cut with it.”

The National Institute for Drug Abuse reported 2020 had been the largest increase in fatal overdoses since 1999. According to the Center for Disease Control and Prevention, approximately 57,000 people died from synthetic opioids (predominantly fentanyl) last year, compared with around 13,000 people who died from heroin overdoses. Furthermore, the National Institutes of Health reported that the COVID-19 pandemic and the opioid crisis are whipsawing the country with deadly effects.

“As a primary care and addiction medicine physician I see the devastation opioids have caused to individuals and the community,” said Kaitlan Baston, MD, Division Head of Addiction Medicine services at Cooper University Health Care. “I commend the Camden County Board of Commissioners for highlighting this important public health issue and championing new initiatives and resources to help those in need. Working collaboratively, the medical community, community partners, and our elected officials can create meaningful ways to combat substance use disorder.”

In Camden County, a recent review of overdose fatalities revealed 70% of victims had fentanyl in their toxicology screens and 93% had opioids. Unlike other places in the nation, the county, through a mix of treatment services, education and intervention services has seen a drop in fatal overdoses since 2019 from 329 to 290 in 2021. Nevertheless, fatal opioid overdoses continue to be one of county’s largest killers.

“Increasing awareness of the danger of fentanyl, the majority of which is produced in and sourced from China, will save lives,” Congressman Donald Norcross said. “As opioid deaths reach record levels nationwide, it is vital that we work with the community and every level of government to address the problem of opioid misuse. I thank the Addiction Awareness Task Force for doing this important work and launching this latest public education campaign.”

To underscore the presence of fentanyl a seizure 66 kilos or 145 pounds of it was taken off the streets by the regional High Intensity Drug Task Force out of home in Pennsauken Township in late September. The narcotic was slated to be sold throughout the county. The operation took almost $2 million of deadly narcotics off the street that had the ability to kill thousands of residents.

“Getting fentanyl-laced drugs off our streets has been a priority for the Camden County Prosecutor’s Office for a number of years and will continue to be a priority for this administration, ” said Acting Camden County Prosecutor Grace C. MacAulay. “This mission begins with education and must include both intervention and treatment. Our office is committed to work with the County in this effort to raise awareness of the dangers of this lethal substance.”

Tanya Niederman lost her 19-year-old son, JJ Niederman, to a fatal encounter with fentanyl earlier this year and talked about the importance of advocating and reaching impressionable teenagers about this subject.

“JJ was a wonderful boy who was a good kid,” Niederman said. “When he passed, he never knew he was taking fentanyl and that was a fatal mistake. If we can get just one child like JJ to think twice before ingesting something at a party that could be cut with this poison this campaign will be worth it.”