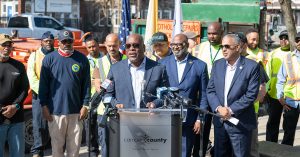 As the weather warms, several crews from the Department of Public Works have been dispatched to repair the potholes created by severe winter weather conditions.

In the nine weeks that crews have been filling potholes throughout in the city alone, there have been approximately 10 tons of asphalt laid per week, totaling over 90 tons since December.  The Camden County Highway Department has filled more 1,250 holes in the city but note that some holes were repetitive due to weather conditions.

“The condition of the streets has an immediate impact on people regardless of whether they drive, walk or ride a bike. And after this year’s bout with snowstorms and frequent freezing temperatures, our roadways have had more potholes open up than ever before,” said Dyer, who also serves as the liaison to the Camden County Department of Public Works. “So that is why it’s one of our top priorities to fix the potholes and roadway issues that are present in the city and the county at large.”

In 2022, the county is set to start more than $15 million into roadway construction projects this season. Beyond that more than $40 million of roadway and infrastructure projects are in the design phase and another $4 million has been designated for bridge repair and construction.

“I am committed to improving our roadways, to making emergency repairs and making major investments in the city’s infrastructure,” Carstarphen said. “Last September, we announced the City’s Department of Public Works repaired 5,822 potholes and contracted to filled an additional 454 potholes city-wide.  Since that time, an additional 2,500 potholes were filled by DPW and almost 200 tons of asphalt has been used to repair roadways. The pothole and repair program continue to focus on making short-term, immediate repairs to our neighborhood streets. This initiative is a good example of the collaborative approach the city and the county are taking to get the job done. While this is a short-term solution, the city is working with federal, state, county and private sector partners to now implement our comprehensive roadway resurfacing plan. This work is decades in the making and will result in millions of dollars of new investment.”

Today, the city of Camden started work on a $2.2 million project to repair and revitalize 7th street in the North Camden neighborhood. The project will encompass the total reconstruction of the street including all utilities and ADA improvements in the intersections starting at 7th and Linden Streets. The project is slated to be completed in the fall of 2022.

“I got up at 5 a.m. and drove to work every day for decades so I understand the critical role our roads play in getting us to work and school. Potholes are more than an annoyance, they can be unsafe, and they can cause wear-and-tear on your vehicle, costing hardworking people money,” Norcross said. “I’m glad to see the Camden County Department of Public Works filling potholes so our neighbors have an easier, safer time driving, and I’m proud to have voted for the Infrastructure Investment and Jobs Act that helps our local governments fill potholes and invest in our neighborhoods.”