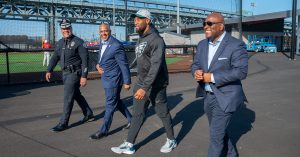 Haason Reddick, who was born and bred in Camden City, has just signed a long-term contract to play football with the Philadelphia Eagles and visited his hometown on Monday. Mayor Vic Carstarphen and Commissioner Al Dyer welcomed the defensive end and took him on a tour of the city to see the changes that have taken place since he left to play football for Temple University. During his college career, Reddick was an all-conference stand out and then joined the Arizona Cardinals in the NFL as the 13th overall pick in the 2017 draft.

“We’ve come a long way since he left for the NFL and I want to show him how the city has evolved and improved over the last 10 years.” Dyer said.

“We are all very proud of Haason’s achievements and Camden is proud to welcome him back home,” Carstarphen said. “It is incredibly powerful for the young people in our community to have someone like Haason to look up to.  I am confident Haason will be making a huge impact on the playing field with the Eagles and off the field within the Camden community.”