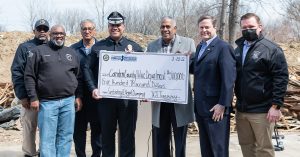 (Camden, NJ) – Commissioner Jon Young joined Mayor Victor Carstarphen, Police Chief Gabriel Rodriguez and Congressman Donald Norcross Wednesday to launch the city’s newest initiative that will curb illegal dumping in the community. Thanks to a $500,000 grant from the federal government, the Camden County Police Department has purchased more than 100 security cameras that will be strategically placed around the city in common dumping areas to catch perpetrators in the act and prosecute them for their crimes.

“Congressman Donald Norcross is always a fierce advocate for this city, and he fights tirelessly to get us funding that will improve the quality of life for Camden County residents,” Commissioner Young said. “Illegal dumping is an ongoing issue in our community and everyone who lives, works or travels here has to deal with its detrimental consequences. People, who often times are traveling from outside Camden, are illegally dumping trash, construction materials, hazardous waste and other harmful items that not only contribute blight in neighborhoods but also threaten the health and safety of people who call this city home. These cameras will give our police department another tool in the fight against illegal dumping, hopefully leading to more apprehension and punishment of these violators.”

The presence of state-of-the art security cameras that come equipped with license plate readers at active illegal dumping sites will improve the police department’s ability to not only catch the dumpers and bring them to justice, but to also alleviate blight and improve the quality of life for residents.

“Illegal dumping is unsightly, unhealthy, an environmental challenge and also leads to blight and compounds public safety concerns within Camden’s neighborhoods,” Carstarphen said. “Many of those caught and prosecuted for dumping debris are from outside the City of Camden.  The City of Camden, Camden County Police, and many other partners have been working to crackdown on illegal dumpers.  The City expends roughly $4.7 million each year on the cleanup and disposal of illegal dumping debris. That’s an average of 9,500 tons of debris, including trash, tires, and electronics, are collected from illegal dumping sites each year. I am incredibly grateful to Congressman Donald Norcross for always fighting for critical funding which will help to improve the quality of life in Camden.”

According to recent data, there are currently 50 active dumping sites within the city’s limits. By infiltrating these dumping hot spots with high quality cameras, Camden is better able to enforce illegal dumping ordinances and bring criminal dumpers to justice thus taking an enormous step toward eliminating the practice of illegal dumping altogether.

“Illegal dumping has been a major issue across New Jersey, specifically here in the city of Camden,” said Assemblyman Bill Moen. “I sponsored bill A-5663, which was signed into law by Governor Murphy. This law not only increases the penalties for transporting or disposing of solid waste by doubling the fines that were in place, but it also allows local governments to recoup their costs for clean-up as well as any attorney’s fees that they incurred by prosecuting the offenders. Illegal dumping offenders: this is your warning, we are coming for you.”

The objective for the project is to use the camera network to address public health and safety incidents in real time and to prevent such incidents before they happen. This initiative will limit the long-term and short-term effects of illegal dumping that negatively impact the residents who call this city home.

“Illegal dumping is wrong and dangerous for our communities. It’s inexcusable that unknown companies are using Camden City as their trashcan,” Norcross said. “Many of these groups come from out of town, and likely out of state, and dump debris illegally in our neighborhoods. It’s unsafe, it’s unhealthy, and it’s totally unacceptable. The funding I secured in the federal appropriations bill will help establish a network of cameras to catch perpetrators in the act so we can hold these companies accountable.”