CCPD Lieutenant Saves Man from Overturned Vehicle on I-295 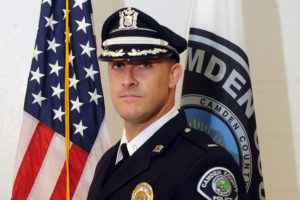 (Camden, NJ) – One Camden County Police Officer’s morning was turned upside down when he suddenly found himself pulling a man from his car on I-295.

Lieutenant Kevin Lutz was on his way to work on the morning of Monday, July 24, when he first spotted a severe car accident near the highway. Heroically, Lutz pulled the unidentified man from the wreckage. The victim was unresponsive and Lutz performed CPR until New Jersey State Police and EMS arrived on scene.

“If it wasn’t for Lieutenant Lutz, we don’t know if this victim would even be alive today,” Cappelli said. “All of the officers in our police department take an oath to serve and protect their community, and this is the impact that their promise makes. Someone’s family nearly lost a member last week, and that might have happened without the proactive and responsive effort of Lieutenant Lutz.”

The victim was later taken by emergency responders for medical attention. His current status has not been made public.