CCPD Gets $2.5 Million in COPS Grant Funding for Metro 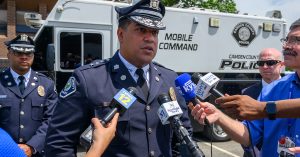 The COPS Hiring Program offers grants to state, local and tribal law enforcement agencies to hire or rehire community policing officers. The program provides the salary and benefits for officer and deputy hires for three years. Grantees for the 2021 hiring program were selected based on their fiscal needs, local crime rates, and their community policing plans.
“The grant crafted by the CCPD will preserve more police officers to work with residents in the city’s 21 neighborhoods this year and into the future,” Cappelli said. “This allotment of federal funds will help us keep making progress and provide the capacity needed to meet our objective, which is to reduce crime and make residents feel safer.”

Since its creation in 1994, COPS has invested more than $14 billion to advance community policing, which includes awarding grants to more than 13,000 state, local and Tribal law enforcement agencies to fund the hiring and redeployment of more than 135,000 officers. In the 2021 fiscal year, COPS received 590 applications requesting nearly 3,000 law enforcement positions. For the fiscal year of 2022, President Biden has requested $537 million for the COPS Hiring Program, which is an increase of $300 million.

Vic Carstarphen, Mayor of Camden City, was enthused by the allocation.
“The $2.5 million COPS grant is great news for Camden and our residents,” Carstarphen said.  “I made a promise to improve and enhance public safety in our city and I can say without hesitation that I intend on keeping and building upon this promise to our residents. I want to thank our U.S. Senators Menendez and Booker and Congressman Norcross for their continued commitment in ensuring Camden receives its fair share of federal funding. Working in partnership with our residents, the county, the state and our congressional delegation, we have truly made Camden a national model on how to improve public safety.”
Since the Camden County Police Department was launched on May 1, 2013, there has been a marked reduction in crime and homicides in Camden. This year has seen a continued reduction in homicides and since its inception a 60% decrease in overall crime. This progress has led to the city’s largest decrease in crime in more than 50 years.
Chief Rodriguez talked about the continued impact the department has had on the city and the difference that extra resources will make in the department’s community policing efforts.
“This grant will allow even more officers to establish stronger bonds with the community to make our neighborhoods safer,” Rodriguez said. “I want to thank the Director of the COPS office, Robert Chapman and U.S. Attorney Rachael Honig for their continued focus on providing local law enforcement with the tools and resources to reduce crime and allow us to put more officers on the streets to build bridges with our residents.”