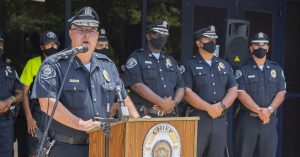 “I want to thank all of the participating agencies for closing this case and bringing justice to our victims,” Wysocki said. “I cannot say enough good things about the work that was done by our shooting response team with assistance from the Camden County Prosecutor’s Office, FBI, ATF, DEA, the US Attorney’s Office, the Marshalls Task Force and the New Jersey State Police.”

On Tuesday night, Sept. 15, at 11:46 p.m., police responded to the 2900 block of Clinton Street. The residence of the officers was struck by six rounds while they and their infant were on the second floor. Detectives located seven spent shell casings in front of the home with two rounds traveling through the front door into the interior of the residence.

“Getting these particular individuals off the streets will be a benefit for our community, that said, we are addressing a sudden surge in violent crime,” Wysocki said. “We are focusing all our efforts now on gun violence in order to proactively suppress and eliminate violent crime. That’s why today we are starting a new partnership with the ATF, so agents can work hand in glove with our shooting response team officers. We want to send a clear message to individuals that would even think about pulling a trigger- we will find you and prosecute you to the fullest extent of the law and you will not terrorize our community.”

All four suspects are being charged with three counts of Attempted Murder 2C: 11-3, Conspiracy to Commit Murder 2C:5-2, Unlawful Possession of Weapon 2C:39-5, and Possession of a Weapon for an Unlawful Purpose 2C. All four have all been remanded to the Camden County Jail.