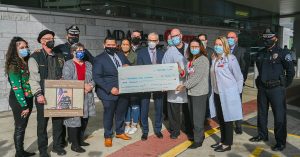 The Camden County Police Department and FOP Lodge 218 donated $8,000 raised by officers during “No Shave November” and $1,000 from the family of fallen Officer Matthew Sviben to The Cooper Foundation, to support colon cancer research at MD Anderson Cancer Center at Cooper.

The total of $9,000 raised by Camden County Police officers and the Sviben family was donated Friday, December 17th, by the FOP and the department to MD Anderson specifically for colon cancer research.