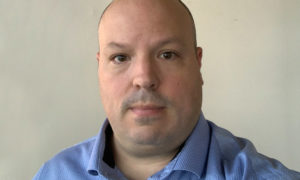 “There is no one better positioned to lead the CCMUA into its next chapter than Scott Schreiber,” said Freeholder Jeff Nash, liaison to the CCMUA. “Scott brings years of institutional knowledge and experience serving the residents of Camden County to the position, and we expect that he will immediately begin seeking additional ways to innovate and contribute to our region’s public and environmental wellbeing. With Scott’s strategic vision, the CCMUA will remain a model for municipal utilities around the country.”

Schreiber, a Rutgers-Camden graduate, has committed his career to nonprofit and public service leadership. Prior to joining CCMUA, he served as the executive director of the Audubon Mutual Housing Corporation from 2006 through 2012, a nonprofit cooperative housing project in Audubon Park, where he focused on improving infrastructure and maintaining a strong financial position.  In the eight years since joining CCMUA, Schreiber has served in several key positions, including as the planning administrator, grant administrator, budget officer and deputy executive director.

Schreiber will replace outgoing executive director Andy Kricun, who retired Saturday after more than 30 years of service at CCMUA.

“Andy Kricun spent more than three decades serving the people of Camden County, and we are incredibly thankful for his passion and leadership,” Nash said. “At CCMUA, Andy helped lead initiatives to end the pollution of local waterways, and to return these critical natural resources to the public for recreational use. His pioneering enterprises in water infrastructure and preservation have been a boon to public health and helped make Camden County a leader in the fight for clean water.”

Kricun spent more than 30 years with the CCMUA, including more than 20 years as the authority’s chief engineer. Prior to joining the CCMUA, Kricun graduated with honors from Princeton University where he received his bachelor’s degree in chemical engineering. He is a certified member of the American Association of Environmental Engineers and serves on the board of the National Association of Clean Water Agencies (NACWA).

In 2012, Kricun was awarded the Praxis award for professional ethics. During his career, he received three environmental quality awards from the United States Environmental Protection Agency. Most recently, Kricun helped take the CCMUA 100 percent energy independent, reducing electricity costs and the impact of unexpected power outages.

The County Regional Wastewater Treatment System treats the sewage discharged every day from properties in Camden County. The CCMUA treats 58 million gallons (220 million liters) of sewage per day at its plant, the Delaware No. 1 Water Pollution Control Facility. This flow travels through 135 miles (215 kilometers) of pipe assisted by 27 pump stations.