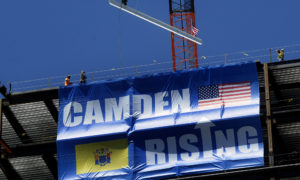 The topping-off ceremony marked another major milestone in the city’s ongoing revitalization, as well as the symbolic completion of the structural phase of the tower, which will serve as the new headquarters for three of New Jersey’s leading companies — Conner Strong & Buckelew, NFI, and The Michaels Organization.

“I applaud these three great New Jersey companies for their vision and foresight in laying down roots in the City of Camden,” said Camden County Freeholder Director Louis Cappelli. “With Camden’s dramatic drop in crime, major educational gains, and ongoing and unprecedented investment, it’s not a decision they’ll regret.”

At 18 stories and 394,164 square feet, the tower is now the tallest building on Camden’s booming waterfront and brings almost 1,000 jobs to the city. The building also boasts a rooftop helipad, a six-level parking garage, and an open-air piazza on the eighth floor with a view of the Philadelphia skyline.

“Today we officially welcome Conner Strong & Buckelew, NFI, The Michaels Organization, and their employees to the City of Camden,” said Camden Mayor Frank Moran. “We are so proud they have chosen Camden as their new home, and we know that they will enjoy, and greatly contribute to, Camden’s ongoing renaissance as a safe and culturally rich place to work, play, and raise a family. Camden is truly rising.”

Conner Strong & Buckelew, NFI, and The Michaels Organization are joining many other businesses, from the Philadelphia 76ers to Subaru, in making their way to Camden. The city is in the midst of an unprecedented turnaround, with crime down by about 40% since 2012 and more than $3 billion in new economic development and investment either recently completed, in progress, or about to begin. The new investment is transforming city neighborhoods, creating jobs for city residents, and making the city an attractive place to live, work, and play.

“It’s great to witness Camden’s historic transformation, and it’s an honor to be a part of it,” said Congressman Donald Norcross. “We’ve seen tremendous job growth in Camden, along with major improvements in city schools, parks, and public safety. Today is another huge milestone as we top off construction of this new office headquarters, which is certain to become a powerful symbol of the city’s rebirth and a defining feature of our skyline for generations to come.”

The leaders of Conner Strong & Buckelew, NFI, and The Michaels Organization are also investors in 11 Cooper, a $48 million residential development bringing 156 new rental homes to the Camden waterfront – the first market-rate development on the waterfront in a generation. 11 Cooper is an amenity-rich luxury apartment community that will begin leasing in October 2018, with final delivery expected in Spring 2019.

“Today is a great day not only for Camden, which continues to rebound and revitalize in ways most couldn’t imagine just a few years ago, but also for our individual companies,” said Michael Tiagwad, President & CEO of Conner Strong & Buckelew.  “By making the move to Camden, we are investing in the city and in our companies’ future. The entire team at Conner Strong & Buckelew look forward to moving to Camden and being an integral part of what’s to come for the city.”

“We are so proud to be a part of the unprecedented change under way in Camden and we look forward to this great city being home to our new headquarters,” said John J. O’Donnell, President of The Michaels Organization. “We have been revitalizing neighborhoods and housing in Camden for 20 years, and this headquarters move is just the latest sign of The Michaels Organization’s unwavering commitment to the city’s future.”

“Camden’s growth and progress have been remarkable, and I am proud that NFI is part of its future,” said Sid Brown, CEO of NFI. “I am eager for our employees to experience all the wonderful things that our new headquarters will provide. The city has a very bright future and I look forward to NFI calling it home and being an active member of the community.”