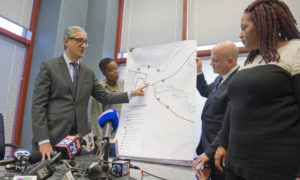 Officials from the City of Camden, Camden County, Cooper’s Ferry Partnership, and Rutgers-Camden Center for the Arts, will announce plans to spend a $1 million grant awarded to transform illegal dumping sites into public art spaces throughout the City of Camden. Camden was one of four cities chosen from a pool of more than 200 for the Bloomberg Philanthropies Public Art Challenge.

“Anyone taking a PATCO train through the city can see the destruction and decay caused by criminal dumping in Camden,” said Freeholder Jeff Nash, liaison to the Camden County Department of Public Works. “We are going to work to, not only create art installations, but craft and construct places were our community can thrive and what we hope to be the very definition of a third place for residents to congregate outside their home and workplace.”

As an award recipient, the city will receive $1 million for “A New View,” a public art project that will transform sites plagued by littering along major transit corridors into dynamic art spaces, inspiring residents and attracting visitors. It will include art installations and creative programming at several sites along Camden’s rail, road, and bike routes.

“A New View” will encourage residents to combat illegal dumping of household and or industrial waste through education efforts and public-private partnerships.  The city also aims to strengthen the local artistic community and improve the quality of life for Camden residents. Led by the urban redevelopment nonprofit Cooper’s Ferry Partnership (CFP) and Rutgers-Camden Center for the Arts, the collaboration will engage independent curators, the Camden Collaborative Initiative environmental organization, the Camden City Cultural and Heritage Commission, local businesses, and residents.

“We want to thank our partners, Cooper’s Ferry, Rutgers-Camden Center for the Arts, and Camden City, for their effort and perseverance in this process,” Nash said. “This is another example of how productive partnerships between government, academia, and the non-profit sector, can lead to meaningful change for cities and their communities.”

Camden Mayor Frank Moran added that the project represents a turning point on one of his administration’s primary issues.

“Illegal dumping is unsightly, unlawful, and costs the city over $4 million annually,” Moran said. “This winning project provides a unique way to bring together residents and artists to address this issue with creativity and create a brighter future for Camden.”